AceShowbiz -Bhad Bhabie (Danielle Bregoli) isn’t taking her father’s advice after his absence from her life for years. The raptress has seemingly clapped back at her estranged dad Ira Peskowitz after he spoke against her OnlyFans career.

On Tuesday, May 3, the 19-year-old star took to her Instagram Story to share a screenshot of a Facebook post about not needing someone in her life. “Imagine not supporting me all those years and I get rich anyway,” read the cryptic message, which Bhabie added with a melting smiley face. 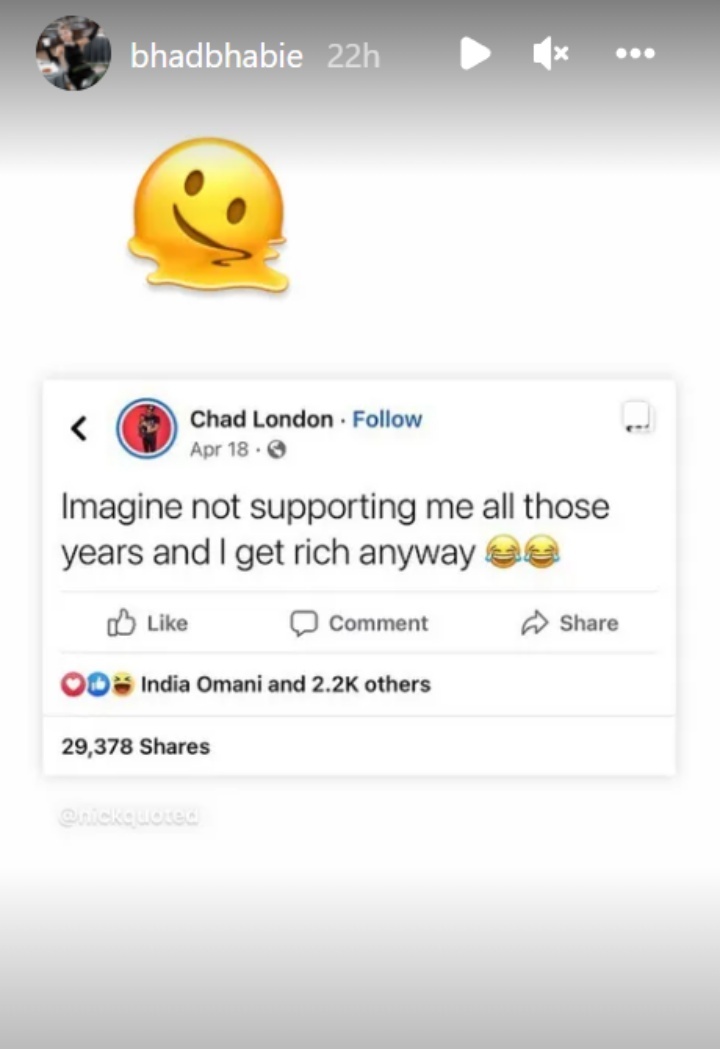 Bhab Bhabie posted a cryptic message after her father criticized her OnlyFans career.

While it’s unclear whom the message was directed to, Bhabie’s Story comes in the wake of her father’s comments about her OnlyFans career. Ira, who has been estranged from the former “Dr. Phil” star for years, blames those around his daughter for allegedly grooming her to become an X-rated star.

“Was she groomed? Absolutely. With the way she dressed, the way she acted, everything was sex related and encouraged by people around her,” Ira told The Sun. Believing that it had been planned long before she officially became adult, he argued, “Who in their right mind thinks ‘Ah she’s just turned 18 so now it’s time to make money on OnlyFans’, you don’t think of that in a few days there must have been some preparation when she was under 18.”

The deputy, who works for the Palm Beach County Sheriff’s Office, further gave his two cents, “You don’t just come with an idea like that and all of a sudden generate that amount of people and that amount of money, you have to prepare, it is pre planned.” He added, “It’s not normal to pay to see a barely legal girl explicitly. The sad thing is they treat her like a product. Everyone around her just wants her to make money.”

Ira went on criticizing Bhabie’s career choice, “She doesn’t rap anymore, she doesn’t sing, she doesn’t go on tour.” He continued, “She sits in her house and she does her OnlyFans. I don’t know how many hours a day they are telling her to do it but to make that kind of money must be time consuming. I know there’s a leaked video of her with a bunch of girls doing sexual things.”

Ira also doubted her claim of making $50 million from OnlyFans. “I do believe she is making a decent amount of money for sure, but I never believe the amount people say – in my opinion it’s bloated. I believe $50 million is very far fetched,” he stated. “But if they are making $50 million why the hell are they bragging about it? I hope they are paying taxes because that’s a sure fire way of getting the attention of the IRS.”

Despite disapproving of her career in the adult entertainment industry, Ira said he still loves his daughter. “I would like to say what I have always stated. That I still love Danielle and I never abandoned her,” he claimed, before imploring, “I would love the opportunity to have a sit down with her and discuss her concerns and reveal my side of the truth.”