Dancing On Ice 2023 FIRST LOOK: Ekin-Su Cülcüloğlu, Michelle Heaton and Patsy Palmer sparkle in glamorous costumes as they lead the star-studded line up ahead of the show launch on January 15

Ekin-Su Cülcüloğlu, Michelle Heaton and Patsy Palmer and their fellow celebrity competitors were seen for the first time in their glamorous dance costumes on Wednesday as they posed for promotional pictures ahead of the series launch.

The eleven celebrities will embark on the ultimate challenge as they take to the ice each week, skating live in a bid to impress both the panel and viewers at home.

And the stars looked raring to go in a stunning group shot as they prepare to battle it out for the trophy in January. 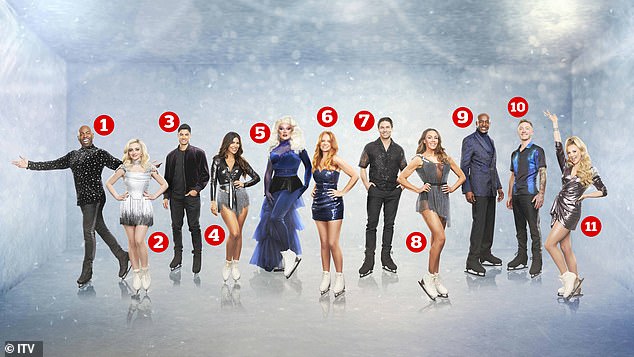 Patsy put on a leggy display in a metallic navy mini dress, while RuPaul’s Drag Race UK’s The Vivienne put on a glamorous display in a long blue gown. 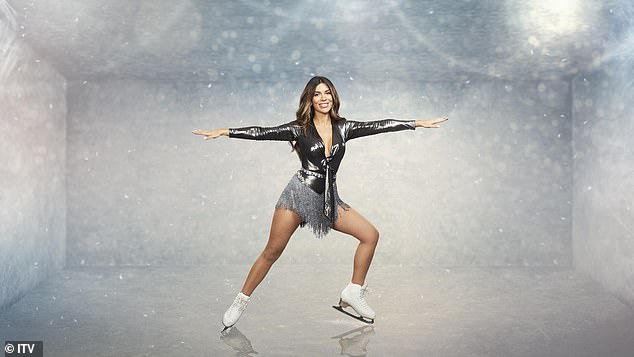 Incredible: Ekin-Su put on a busty display in a plunging grey top with a tassel skirt 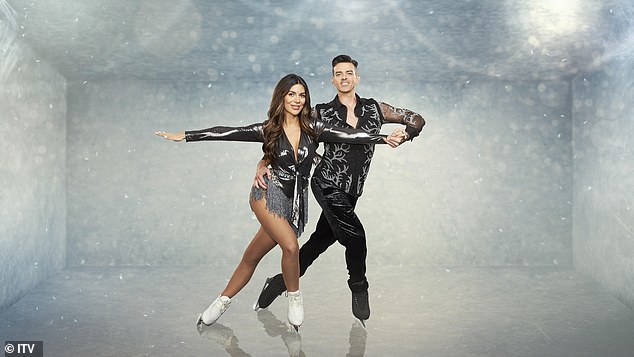 Pair: The 2022 Love Island winner is paired up with professional skater Brendyn Hatfield 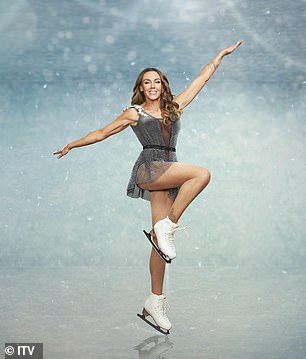 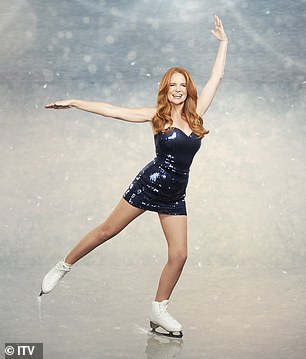 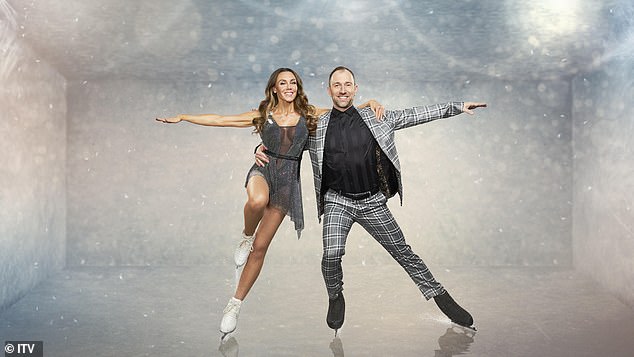 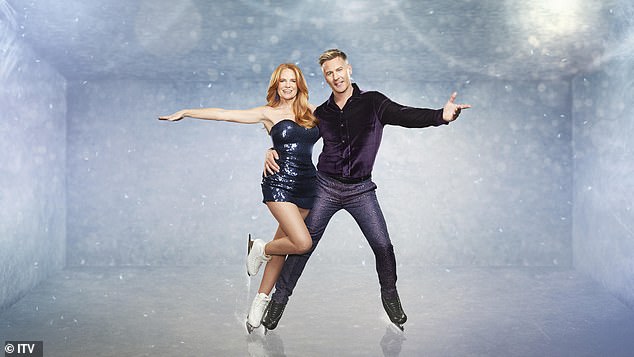 Duo: Patsy is paired up with dance legend Matt Evers

Siva was confirmed as the final star to sign up for the new series of Dancing On Ice, with the full all-star cast being revealed.

The Wanted singer, 33, is the 11th celebrity competitor for the ITV figure skating competition which is set to air in January.

A TV insider told The Sun : ‘He’s a great signing for the show – The Wanted still have a huge loyal fanbase.

‘After all the boys have been through this year with losing their bandmate Tom Parker, fans will be willing him to go all the way in Tom’s memory.’ 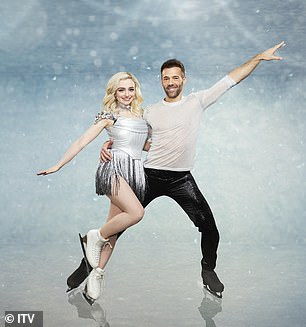 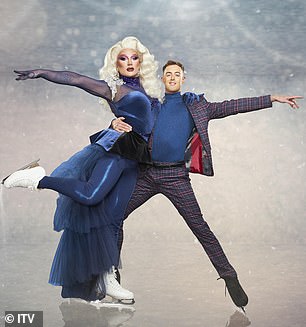 Glam: The stars looked raring to go in a stunning group shot as they prepare to battle it out for the trophy in January (Mollie Gallagher and Sylvain Longchambon) 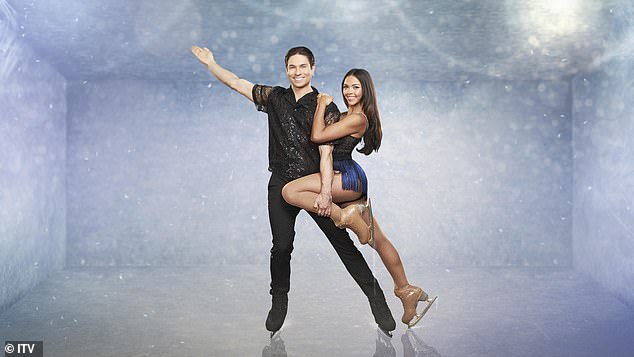 Beaming: Joey Essex looked dashing in a black shirt while professional Vanessa Bauer shows off her incredible figure in a navy costume

It was announced that former Liberty X star Michelle was the 10th celebrity to sign up for the upcoming series of DOI.

The singer, 43, confirmed the exciting news on Monday’s Lorraine as she told the presenter she ‘never’ could have competed in previous years due to damage caused to her body by alcoholism.

She said: ‘I’m so excited, I can’t believe it. Me and the kids are huge fans and we watch every series. I would never have been able to compete because of the way my body is and I’m so grateful I got this this year so I can do it properly. 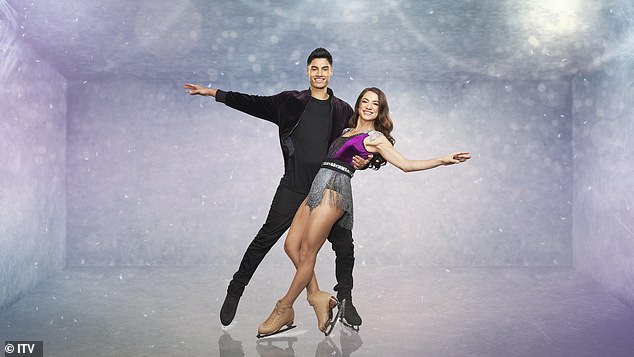 Highly-anticipated show: Siva Kaneswaran and Klabera Komini showed off their dance moves ahead of the show 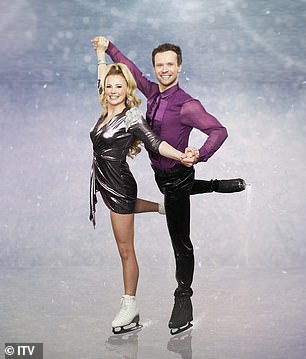 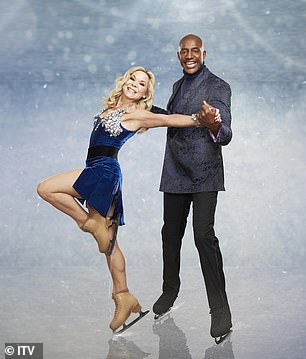 Exciting: The eleven celebrities will embark on the ultimate challenge as they take to the ice each week, skating live in a bid to impress both the panel and viewers at home (Carly Stenson and Mark Hanretty) 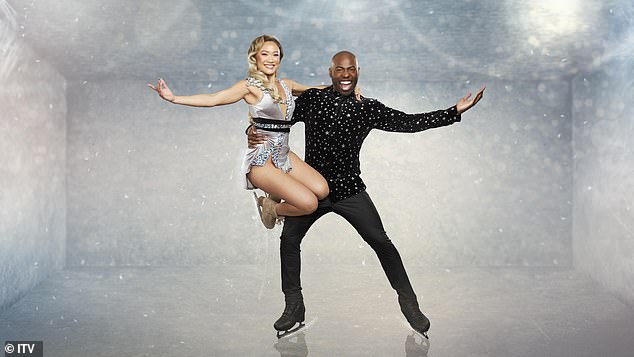 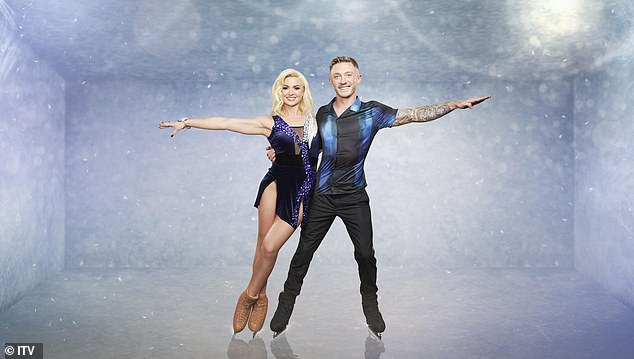 Ready to go: Olivia Smart and Nile Wilson were seen for the first time in their glamorous dance costumes on Wednesday as they posed for promotional pictures ahead of the series launch

‘I have no idea what I’m doing. I’m not a skater. I’ve been on the ice a few times to audition. I get my skates tomorrow.’

After confirming he was appearing on the show, Darren joked his ‘giant feet’ could be problematic.

The comedian, 34, joined Trisha Goddard on Talk TV to confirm he was the ninth celebrity in the line-up, where he said: ‘I’ve got giant feet, I don’t skate and I can’t dance! 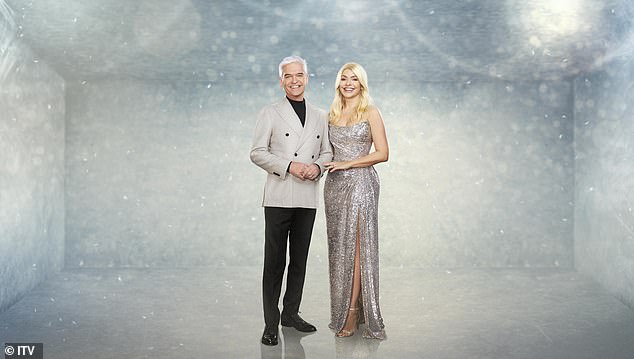 Looking good: Phillip Schofield and a glamorous Holly Willoughby posed for promotional pictures ahead of the 2023 Dancing On Ice launch 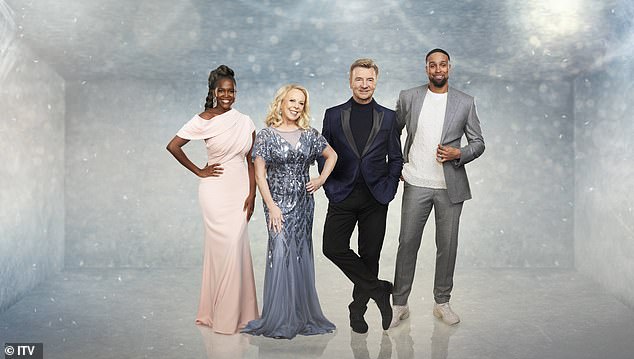 ‘My family has already made bets – they’re making bets that I’ll fall on the first episode!’

It was previously announced actress and DJ Patsy , football legend John, Love Island winner Ekin-Su would also be appearing on the new series.

TOWIE star Joey was unveiled as eighth star to sign up for hit show, following on from RuPaul’s Drag Race UK’s The Vivienne and Coronation Street star Mollie and Olympic gymnast Nile.

Dancing on Ice returns this January on ITV1 and ITVX

DANCING ON ICE 2023: MEET THE CONTESTANTS

WHAT DID THEY SAY?:  ‘I’ve turned it down before because I was terrified, but when I turned 50 I made a pact to get out of my confront zone. ‘

WHAT DID THEY SAY?:  ‘I’ve got some amazing news to tell you. I’m so excited, I can’t wait to get myself on the ice and skate. Stay tuned and see you on the ice.’

WHAT DID THEY SAY?: ‘I’ve not got the best coordination so when people find out they will laugh, but I don’t want to spend my life saying “I can’t do this, I can’t do that.”

WHAT DID THEY SAY?: ‘I’m so excited. I wanted something in my life with structure and it’s more serious than what I usually do.’

WHAT DID THEY SAY?: ‘I’m so excited that I get to learn how to dance…on ice! I’m terrified but can’t wait – I just want to make the most of this whole experience.’

WHAT DID THEY SAY?: ‘I want to learn how to skate and make my family proud of me and put on a show for everyone to see.’

WHAT DID THEY SAY?:  ‘I am definitely in it to win it.And this may be one of the scariest things I’ve ever signed up for but I couldn’t be more ready for the challenge!’

WHAT DID THEY SAY?: ‘I’ve not done much ice-skating but I am so excited for the opportunity. I’m so excited to get into that routine and to feel like an athlete again.’

JAMES LEE WILLIAM AKA THE VIVIENNE

WHAT DID THEY SAY?: ‘To be the first drag artist to take part in one of the big UK reality competition shows is an honour and a big step forward for queer representation on TV.’

WHAT DID THEY SAY?: ‘I’ve got giant feet, I don’t skate and I can’t dance. My family has already made bets – they’re making bets that I’ll fall on the first episode!’

WHAT DID THEY SAY?: ‘I’ve always wanted to do it but I know I would never have been able to complete anything because of the way I was 18 months ago, so I’m really truly grateful that I’ve got it this year when I’m a lot stronger.’