Leave It To Beaver star Tony Dow has died on Tuesday at age 77.

The actor’s death was announced later in the morning on Facebook in a note from his management team.

Dow’s death comes just two months after his May announcement that he had been diagnosed with cancer, though no cause of death was initially revealed. 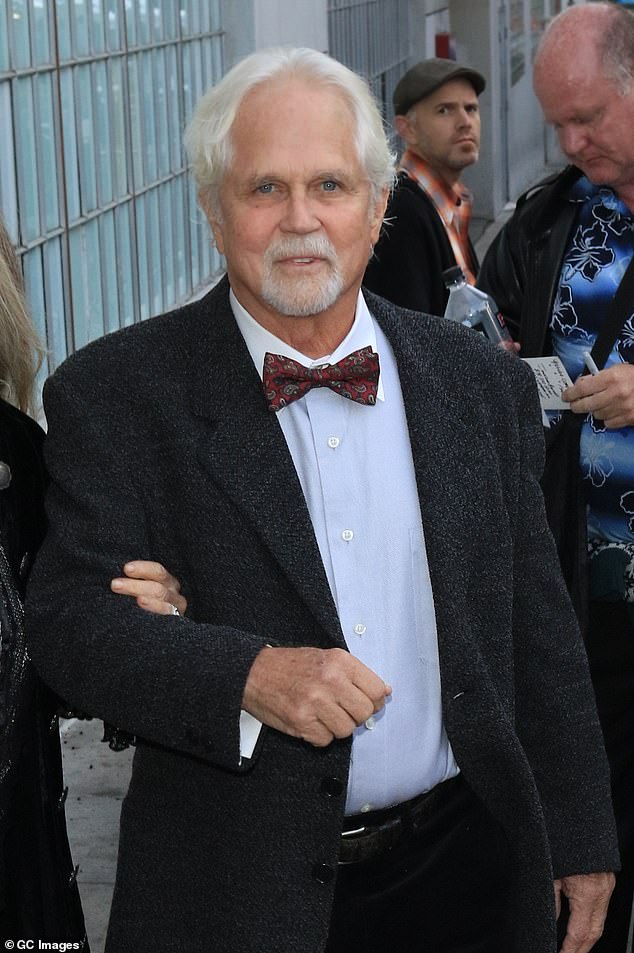 Saying goodbye: Leave It To Beaver star Tony Dow has died at 77, his management team announced Tuesday in a Facebook post; pictured in 2017 in Los Angeles

The Facebook post, which was credited to Frank Bilotta and Renee James, referred to Tony as a ‘beautiful soul.’

‘It is with an extremely heavy heart that we share with you the passing of our beloved Tony this morning,’ it began.

‘Tony was a beautiful soul — kind, compassionate, funny and humble. It was truly a joy to just be around him,’ they continued. ‘His gentle voice and unpretentious manner was immediately comforting and you could not help but love him.

‘The world has lost an amazing human being, but we are all richer for the memories that he has left us. From the warm reminiscences of Wally Cleaver to those of us fortunate enough to know him personally — thank you Tony.’

They also offered thanks for ‘the reflections of a simpler time, the laughter, the friendship and for the feeling that you were a big brother to us all.’

‘We will miss you,’ Bilotta and James concluded while noting that they were just his ‘management team,’ but also his ‘dear friends.’

Heartfelt: ‘Tony was a beautiful soul — kind, compassionate, funny and humble. It was truly a joy to just be around him,’ his management team Frank Bilotta and Renee James wrote 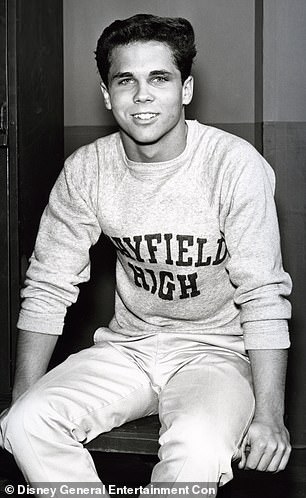 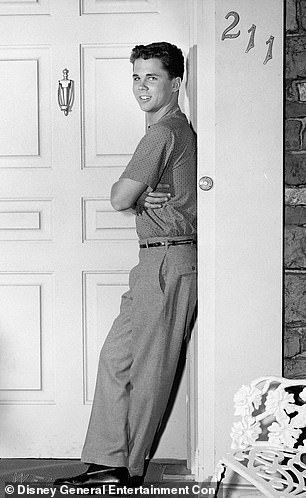 Veteran star: Dow played Wally Cleaver for the entirety of Leave It To Beaver’s six-year run, from 1957 to 1963. He reprised his role in the 1980s in a reunion movie and series The New Leave It To Beaver, but last year revealed he struggled with depression after being typecast

The Los Angeles native and his wife of 41 years, Lauren, previously said in May that they were heartbroken over his cancer diagnosis, TMZ reported, and were thankful in advance for prayers from fans.

Dow did not name the type of cancer he had been diagnosed with.

The actor–turned–director dealt with health problems in August of 2021, when he landed in the hospital while battling pneumonia, TMZ reported, noting that he had to spend 24 hours in the emergency room due to a surge in the coronavirus’ Delta strain at the time.

Lauren told the outlet that Dow did not have COVID-19, as he tested negative for the virus five times.

‘On behalf of Tony and myself we thank you for your concern for him,’ she said.

Last week, Dow’s Facebook account shared an update on his condition, calling it ‘… a rollercoaster of ups and downs as Tony continues his fight with cancer. Tony has been in and out of the hospital with various complications and treatments.’

Dow, who was born in Hollywood, played the role of Wally Cleaver on Leave It to Beaver in all 234 episodes of the show from 1957 to 1963 alongside Jerry Mathers, and late stars Hugh Beaumont, Barbara Billingsley and Ken Osmond. 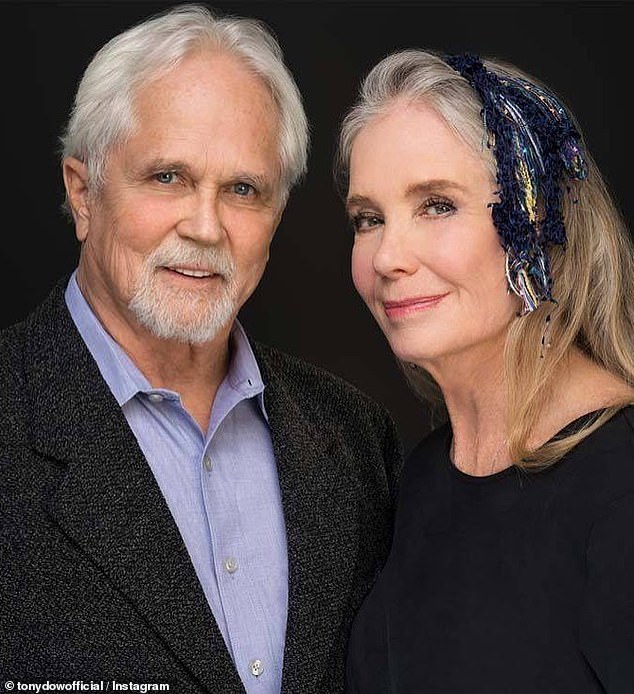 Bad news: Leave It to Beaver actor Tony Dow, 77, previously revealed that he had been diagnosed with cancer in May. The late actor is pictured with his wife Lauren, whom he married in June 1980 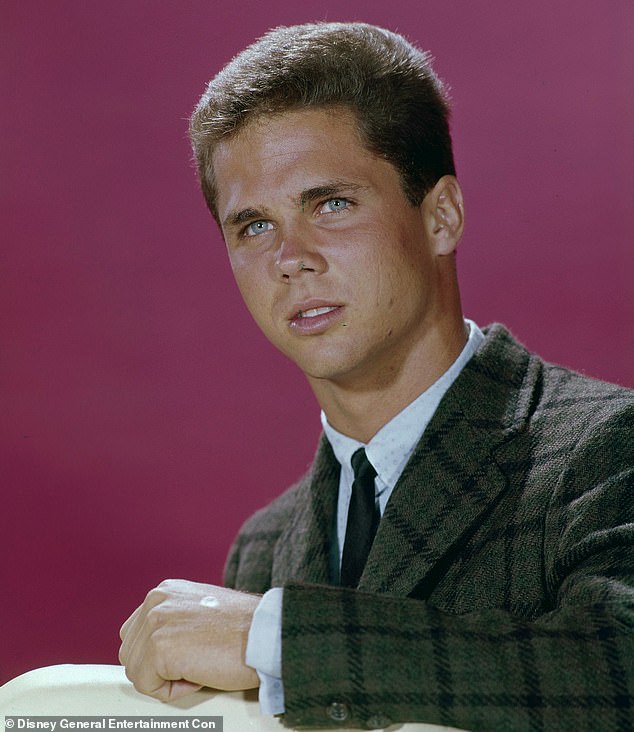 Iconic series: Dow played the role of Wally Cleaver on Leave It to Beaver in all 234 episodes of the show from 1957 to 1963 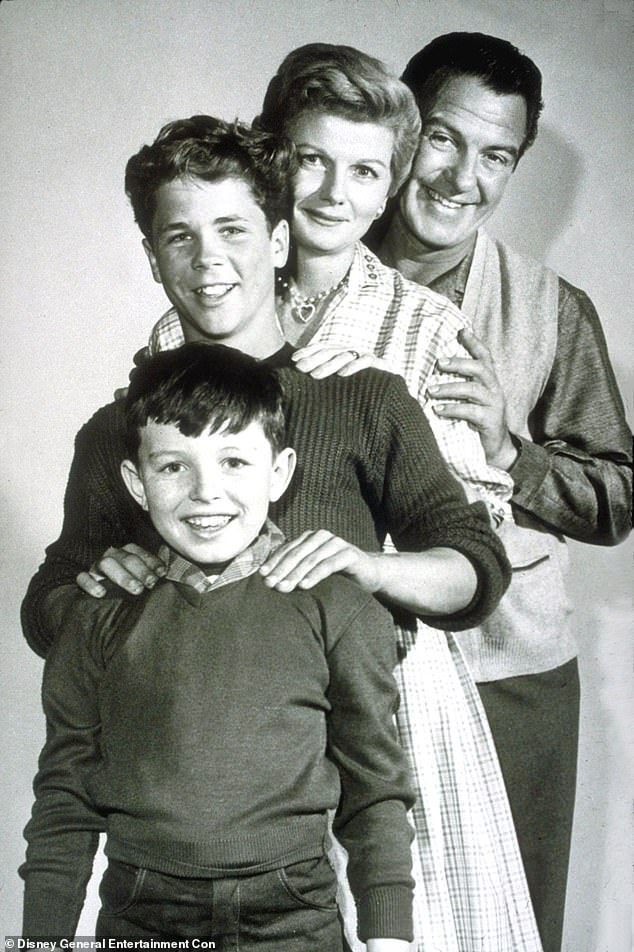 Big brother: The actor who played Wally Cleaver appeared on the famed show with Jerry Mathers (front) and late stars Hugh Beaumont and Barbara Billingsley who played June and Ward (back)

Although the focus was initially on the title character, Dow’s old brother took on a greater prominence as he aged into a teen heartthrob.

He has also appeared on TV shows including Lassie, Adam-12, Mod Squad, Knight Rider, Charles in Charge and Murder, She Wrote.

The former child star put his acting career on hold in the late 1960s when he spent multiple years in the National Guard.

The TV veteran has also worked extensively as a director, having helmed multiple episodes of shows including Harry And The Hendersons, Babylon 5, Star Trek: Deep Space Nine, Swamp Thing and Honey, I Shrunk The Kids: The TV Show.

His most recent acting work was from 2015 and 2016, when he made two guest appearances on the TV series Suspense, a revival of the late-’40s and early-’50s anthology series, which was in turn inspired by the classic radio thriller series of the same name.

Prior to that, he poked fun at his origins as a child star when he appeared as himself in the David Spade comedy Dickie Roberts: Former Child Star, which was released in 2003.

In addition to his show business endeavors, Dow had focused on sculpting for decades, with his work showcased in art exhibitions worldwide, according to his website.

In 2008, he was one of only three sculptors from the United States whose art was exhibited at the Société Nationale des Beaux-Arts exhibition at the Louvre in Paris, according to Deadline.

His work, which often involved thin, contorted figures, bore a resemblance to sculptures by the Swiss artist Alberto Giacometti, though he favored a more abstracted style. 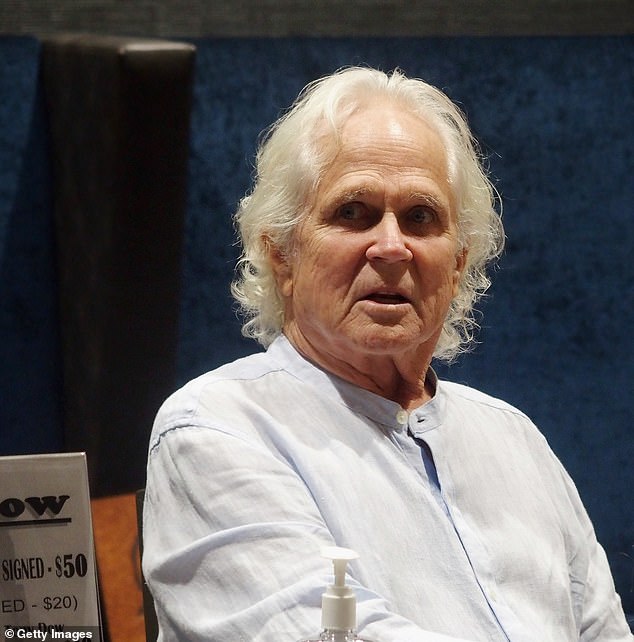 Still going: His most recent acting work was from 2015 and 2016, when he made two guest appearances on the revived TV anthology series Suspense; seen in 2021 in Parsippany, New Jersey 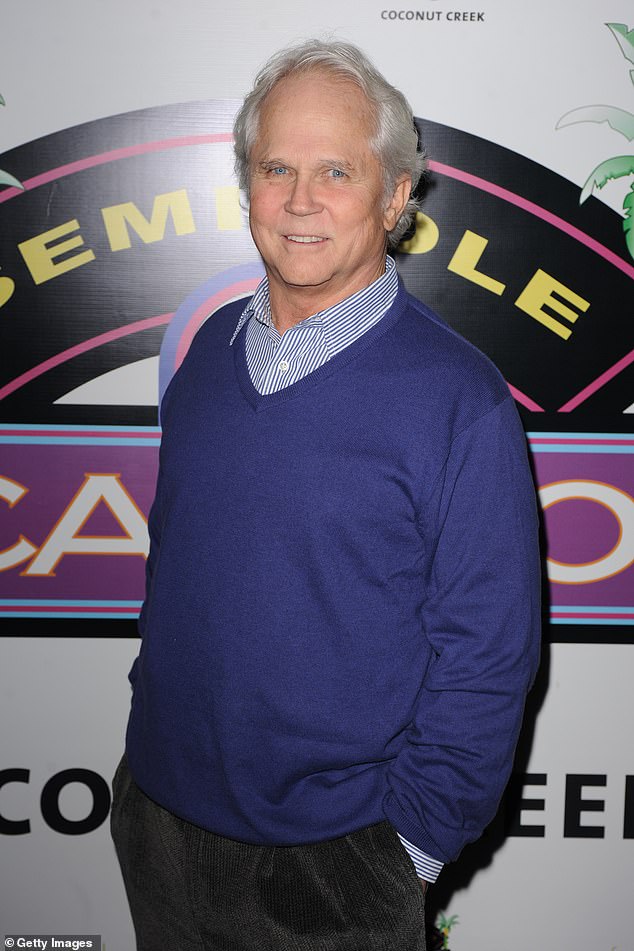 Having a laugh: Prior to that, he poked fun at his origins as a child star when he appeared as himself in the David Spade comedy Dickie Roberts: Former Child Star, which was released in 2003; seen in 2010 in Coconut Creek, Florida 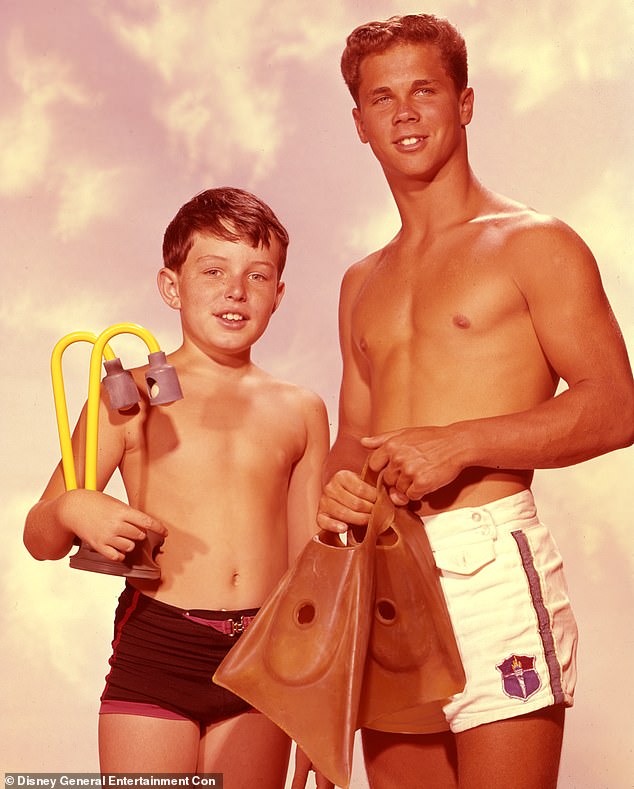 Old school: Jerry Mathers (left) in character as Beaver with Tony Dow as Wally in a publicity photos taken during the 1960–1961 season 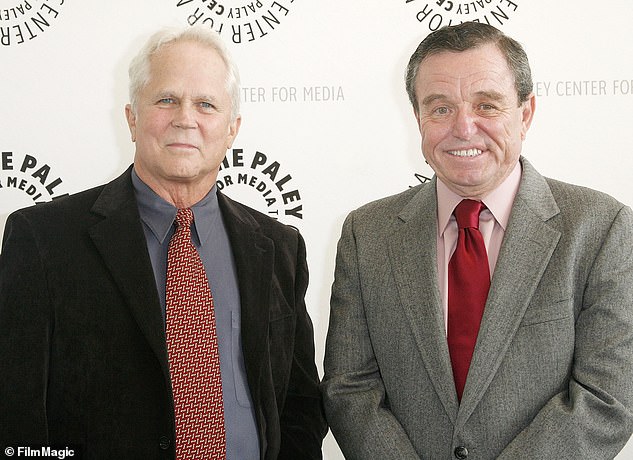 Together again: Dow and Mathers were reunited in 2010 in LA at a PaleyFest event in honor of the series

Dow earlier this year spoke with CBS Sunday Morning, saying that he struggled with depression over being typecast after finding fame early in life as Wally on Leave It To Beaver.

‘I was gonna have to live with it for the rest of my life,’ he said. ‘I thought: This isn’t fair. You know? I mean, I’d like to do some other stuff. I’d like to do some interesting stuff. You know, it’s sad to be famous at 12 years old or something, and then you grow up and become a real person, and nothing’s happening for you.’

He opened up about how he became angry, adding that ‘anger — if it’s untreated — anger turns to depression.

‘Depression isn’t something you can say “Cheer up!” about,’ he said. ‘You know, it’s a very powerful thing. And it’s had a lot of effect on my life.’

Dow said that along with undergoing therapy and taking medication, his work with sculpting has had a therapeutic impact in his depression battle.

‘I’ve got it under control pretty much.’ he said. ‘You know, I think people should take the leap of faith that they can feel better.’ 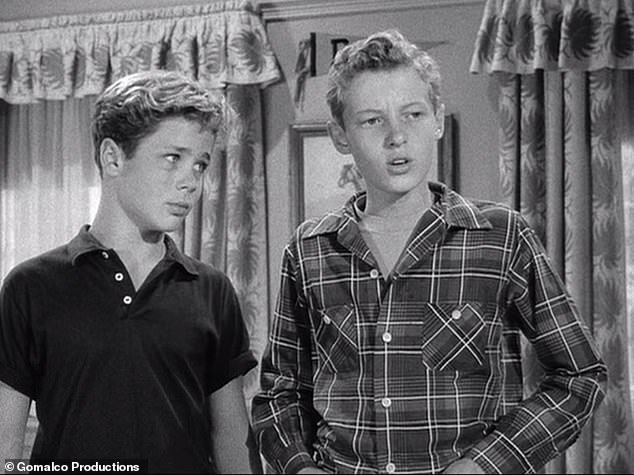 Black-and-white: Ken Osmond and Tony Dow in a scene from Leave it to Beaver in 1957 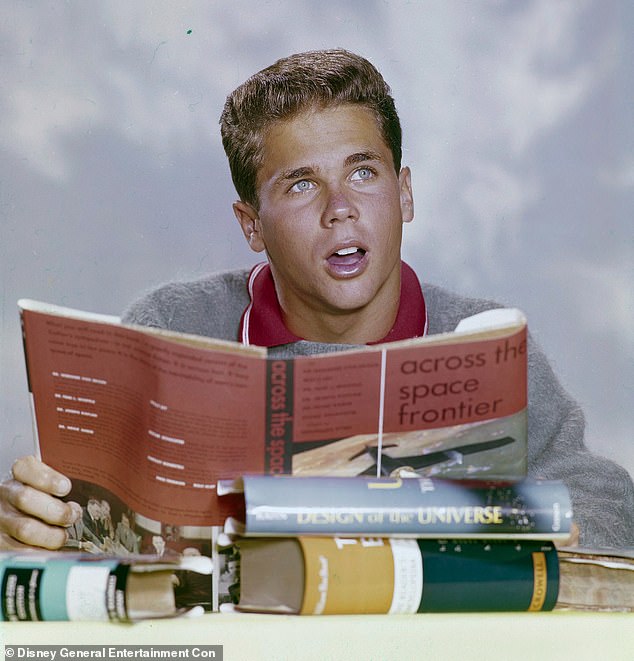 Bad times: Dow earlier this year spoke with CBS Sunday Morning , saying that he struggled with depression over being typecast after finding fame early in life as Wally on Leave It to Beaver 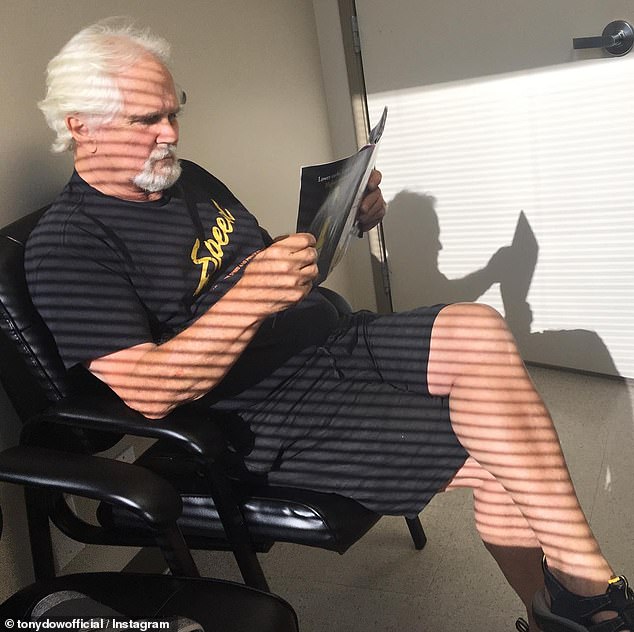 Relaxing: Dow was pictured reading in a shot posted to his Instagram by his wife Lauren