Instead of focusing on the negative, the ‘No More Parties’ raptress and daughter of rapper Benzino chooses to focus on the ‘love’ she’s received from her fans.

AceShowbiz –Coi Leray became a trending topic on Twitter following her performance at the Rolling Loud, but not for the right reasons. The raptress didn’t receive a warm welcome during her set on Saturday, July 24 in Miami.

But Coi was seemingly unbothered by the unexpected reaction she got at the festival. Taking to her Twitter account, she shared her reaction to the silent treatment from the crowd at the hip-hop festival.

“Just wanna say thank you for all the love I get. I’m so loved by so many people it blocks out the hate,” she wrote on Sunday, clapping back at the haters. Reciprocating her fans’ love, she added, “You love me I love you. Forever.”

In a follow-up tweet, Coi went on clapping back at the haters, “It’s about over 100 artist who performed on that lineup and all people wanna do is eat up my cack. Lol. Gotta love this s**t fr I got good problems.” 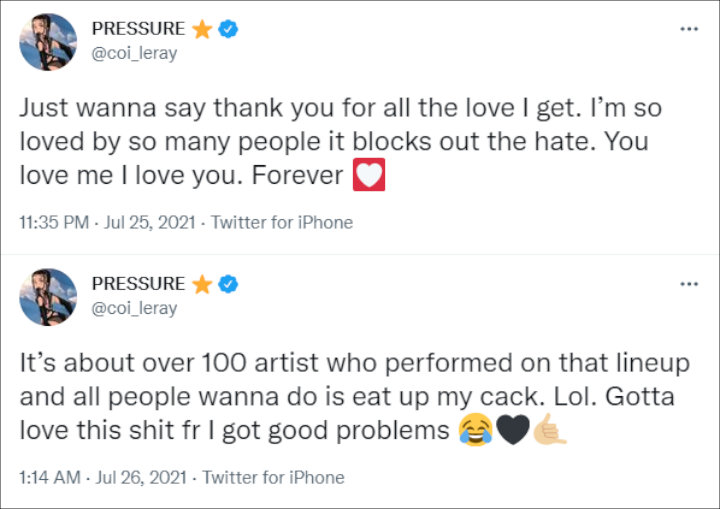 Coi was among the acts who performed over the weekend at the multi-day music festival. Taking the stage to deliver a slew of her bangers including “Attachments” alongside her boyfriend Pressa, she failed to get the crowd moving.

As soon as the daughter of rapper Benzino started rapping the concertgoers were just standing still and looking on, while Coi continued to do her thing with much excitement. She was soon trolled on Twitter following her performance.

“Rolling Loud crowd was standing there like GTA pedestrians watching Coi Leray rap,” one person described the crowd’s reaction. Another poked fun at her, “Coi Leray got the whole crowd doing the mannequin challenge #rollingloud.”