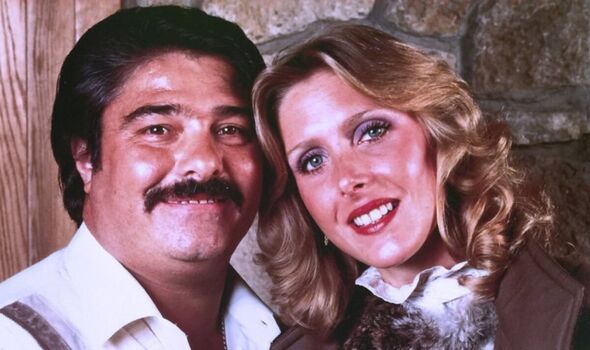 Yet the surprise smash from Renee and Renato, which topped the charts 40 years ago, sold a million and saw its stars win adoring fans and meet Michael Jackson.

Parodied across the world for years, singer Hilary – Renee – didn’t even want to be named on the single at the time.

Today she laughs at the astonishing success of the song, its impact on so many people’s love lives and how she starred alongside 5ft 5in Italian-born waiter Renato Pagliari, who was from the West Midlands.

Hilary also reveals she was initially paid just £100 and recalls how she did not even appear in the video made to cash in.

Then aged 22, she ended up touring the world for three years with Renato but joked that the lure of sex, drugs and rock’n’roll was a world away from their trips.

Hilary revealed: “At the time, Save Your Love was thought of as cheesy and even I didn’t want to be part of it.

“I am amazed by the number of people that remember it 40 years on. It has even gained a little cult status, where people feel it wasn’t that bad.

“It is now fashionable not to dislike it any more. I’m glad it touched people’s hearts, even though it was not my thing.

“I am prouder now in retrospect than I was at the time it happened.

“You cannot choose how your 15 minutes of fame come. I still have had a Christmas number one, and very few big artists have achieved that.”

The song became a million seller but was soon parodied and mocked on TV shows such as Kenny Everett. “I wasn’t offended at all,” says Hilary. “I took that as the greatest compliment. It is lovely when something is considered so significant that it is worth parodying.”

Recalling how her life changed, Hilary, now aged 62, said the pair travelled across the world, even crossing paths with Michael Jackson. But they were far from the stereotypical rock stars.

She said: “I spent far more time at Stringfellows before and after my hit. But we were not sex, drugs and rock ‘n’ roll.

“We worked with Freddie Starr on a show in Jersey and I remember customs went through all the acts’ suitcases.

“But they said ‘it’s Renee and Renato, let them go’. Nobody ever looked at us. I was only 22 – you could at least think I am guilty of something!”

was soon parodied and mocked on TV shows

About the song, she continued: “People took it to their hearts, fans wrote letters, drew pictures and cards saying how much it meant to them. It is a lovely thing. It is why I will not be disingenuous about the song.

“Just because it is not my type of song doesn’t mean it has no meaning to people. It is nice to think we touched the hearts of people for a day, week or 40 years later.”

Young singer Hilary had been on a mission to be in the next Bananarama, in rising girl group The Cover Girls, when she agreed to a session gig for Renato on his ballad. Record label boss Johnny Edward then replaced Hilary with a blonde model on the video shoot.

“There was a big mystery about who the real Renee was and a PR furore. Once they found out my name, the press were camped at my house.That helped propel the record, as well as Terry Wogan always playing it.

“It became imperative that I was not seen, and we carried it through until I debuted in January with Renee at Live At Her Majesty’s TV show.”

Hilary signed a royalties deal for international sales and toured with Renato – who had previously found fame on ITV talent show New Faces in 1975.

And no matter where they went, everyone asked the same question.

“We got asked all the time if we were an item. I was 22 and he was 42, married with two children – and not being rude to Renato but would he be a 22-year-old girl’s fantasy? We had a ball but he saw me as a child. Women fell at Renato’s feet, believe me, but they were in their 30s and 40s. His behaviour was always exemplary.”

Even today their hit hangs over her, she said, revealing: “About 10 months ago I was watching EastEnders and in the background playing was bloody Save Your Love. I cannot believe anybody would have thought to use it in today’s scenes. It pops in the strangest places and takes me by surprise.”

Hilary eventually married a concert lighting designer, had a son and then retired from showbusiness and now fosters guide dogs in Warwickshire.

“Renato was always going to carry on but I felt the act had run its course and was happy to leave it there. We had a ball but I had to get out and spread my wings – I needed to be stupid with my mates.”

Hilary said: “My time with him will always mean nice memories.”