Analysis at the State Serum Institute in Copenhagen found the mutant strain, scientifically known as B.1.1.7, is 36 per cent more infectious than previous variants.

This number is significantly lower than the 70 per cent figure first cited by Prime Minister Boris Johnson, as well as the latest UK estimates, which suggest the Kent strain is around 56 per cent more infectious.

However, the researchers caution estimating transmissibility is a tricky science, and its true increased infectivity could be between 20 and 50 per cent. 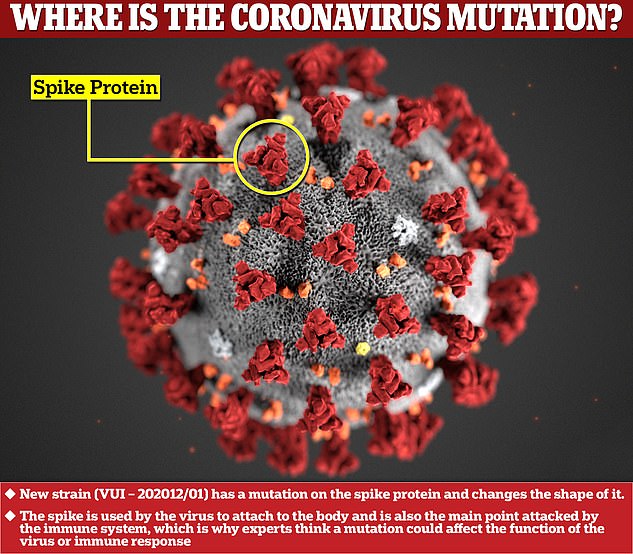 Analysis at the State Serum Institute in Copenhagen found the mutant, scientifically known as B.1.1.7, is 36 per cent more infectious than older strains

‘In our calculations, we have found that the contact number for the British variant is 1.36 times higher than the other variants,’ Tyra Grove Krause, head of department at the State Serum Institute told Danish Radio.

However, Dr Krause adds the numbers have a high degree of uncertainty and are based on early findings.

‘It’s a little lower than what we’ve heard from the UK,’ she says.

‘Still, we have to approach it with caution, because these numbers are not set in stone. They may well change as we get more data,’ she says.

Dr Krause told Danish news site The Local in December that the detailed information on Denmark’s population will help track the virus.

‘This means that we can follow transmission within households, or look at how many people test positive within a household when an index case occurs,’ she explained.

Household attack rate can therefore be monitored and enhanced PCR testing in the country has been developed which identify the genetic code of the new variant to determine its prevalence and allow researchers to track how it is spreading.

The new Kent strain has been registered in at least 380 Danes, and is estimated to account for around eight per cent of all cases in the country.

It has now been found in 60 countries worldwide.

The UK’s top scientific advisers told the Government about the Kent strain in mid-December, after it was identified as the cause of a surge in cases in England. 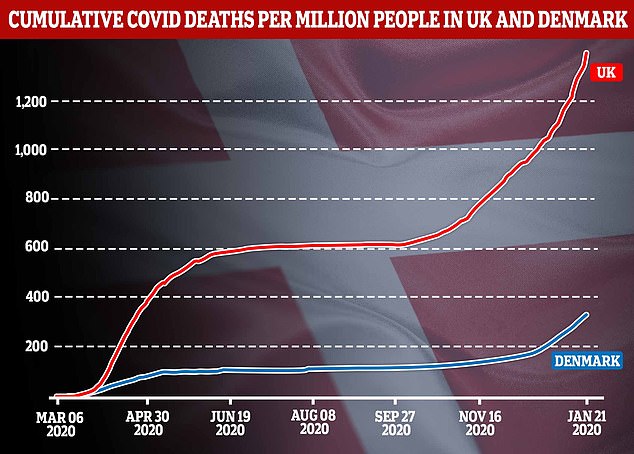 Denmark has registered almost 200,000 cases of Covid-19 with nearly 2,000 fatalities. The new Kent strain has been registered in at least 380 Danes, and is estimated to account for around eight per cent of all cases in the country

December 11 – SAGE tells the Government about the new variant

December 20 – London, South East and East of England go into new Tier 4 restrictions due to spike in cases due to new variant

December 29 – First case is spotted in the US

It is believed the mutant form of the virus is better at infecting human cells and emerged in a long-suffering chronically ill patient.

The Kent variant was designated as a variant under investigation by the UK on December 8 and reclassified as a ‘variant of concern’ on December 18.

The exact origin of the Kent variant is unknown but it is believed it sprung up in mid-September.

Dr Susan Hopkins, a senior Public Health England (PHE) official said in December that originally there was ‘nothing to particularly highlight that this was something of major concern, as variants come and go’.

Mutations in viruses occur all the time, with the vast majority of them being harmless or deleterious to the pathogen.

However, by chance, sometimes the tweaks to the viral code give it a survival edge and increase its success, often by becoming more infectious and easier to spread.

This is what is thought to have occurred in the B.1.1.7 variant, which previous studies have found is more abundant in the upper respiratory tract.

A mutation on the spike protein — which protrudes from the coronavirus and hijacks human cells — made it better at infecting people.

This so-called N501Y mutation is also found on the South African and Brazilian variants which have since been identified.

The Scandinavian nation, with a population of 5.8 million people, approximately the same as Scotland, previously had an outbreak of another mutation found in mink.

It resulted in 17million of the animals, farmed for their fur, being culled and buried. The country had to then dig them up and re-bury them after the carcasses of the dead animals emerged from the graves.

UK COVID strain has spread to at least 60 different countries

The super-infectious mutant strain of coronavirus that was first detected in Kent has spread to at least 60 other countries, the World Health Organization said today.

Cases of the B.1.1.7 variant, sometimes known as VOC 202012/01, have been reported in most of continental Europe, as well as in nations further afield including the US, Australia, India, China and Saudi Arabia.

The WHO revealed the strain, which is thought to be 50 per cent more infectious than the original Covid variant, was detected in 10 new countries in the past week alone.

On Monday the Centers for Disease Control and Prevention said at least 122 cases had been identified in 20 US states, with the bulk being picked up in Florida and California.

There will be far more infections across the US, however, because the CDC only analyses a small percentage of random samples from positive tests. American officials now anticipate the Kent strain will experience ‘rapid growth’ over the next few weeks and become the dominant Covid variant nationwide by March.