Gentle giants! Heavier dogs are significantly LESS likely to be aggressive – while small pups with short snouts like Pugs and Bulldogs are most badly behaved, study finds

If you’re afraid of dogs, you may find yourself wary around large pooches such as Dobermans or Great Danes.

But the results of a new study could refocus your attention away from these breeds, and towards smaller pups.

Researchers from the University of Sao Paulo have revealed that heavier dogs tend to be more obedient than lighter pets.

In contrast, small, short-snouted breeds such as Pugs, Bulldogs and Shih Tzus are the most badly-behaved breeds, according to the study. 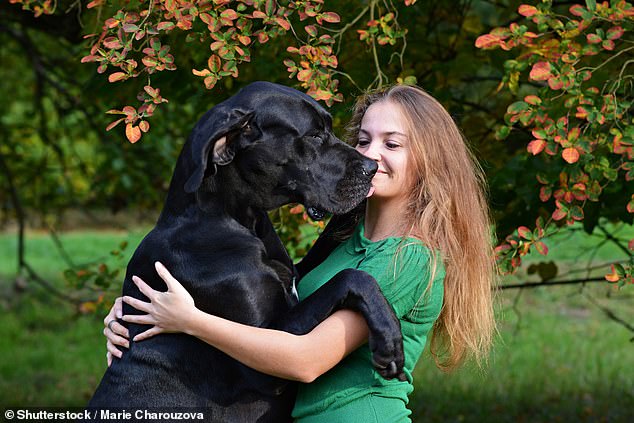 If you’re afraid of dogs, you may find yourself wary around large pooches such as Dobermans or Great Danes (stock image). But the results of a new study could refocus your attention away from these breeds, and towards smaller pups

Experts from Helsinki studied the behaviour of 9,000 dogs, and claim the most aggressive breeds are:

In the study, the team set out to understand the factors that influence aggression in pet dogs.

They enlisted 665 pet dogs across 57 breeds of varying size.

The dogs’ owners completed three online questionnaires – one on themselves, one on the characteristics of their pet, and one on the nature of any aggressive behaviour, such as barking or attacking.

The results revealed that the heavier the dog, the less likely they were to display aggressive behaviours.

In fact, for every extra 2.2lbs (1kg) of body mass, aggressive behaviour was found to decrease by three per cent.

However, small dogs with short snouts were found to be the most aggressive.

Flavio Ayrosa, first author of the study, said: ‘Aggressiveness toward the owner was 79% more likely among brachycephalic than mesocephalic dogs.’

The pet’s sex also appears to influence its aggression.

‘The likelihood of aggressive behaviour toward the owner was 40% lower among female dogs than among males,’ Mr Ayrosa said.

In addition, the team found a link between the owner’s own characteristics and their pet’s aggression.

Aggression in dogs was 73 per cent more frequent among male owners than female owners, while dogs walked every day by their owners were less aggressive. 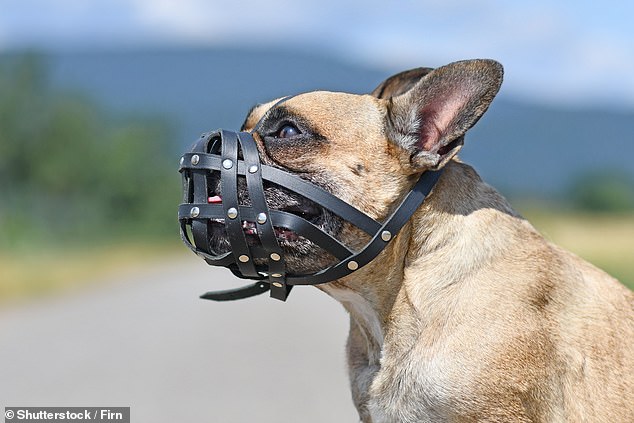 Small, short-snouted breeds such as Pugs, Bulldogs and Shih Tzus are the most badly-behaved breeds, according to the study. Pictured: a French Bulldog wearing a muzzle

However, the researchers caution that these findings are not cause-and-effect correlations.

‘In the case of the factor “walking the dog”, for example, it may be that people walked their dog less because the animal was aggressive, or the dog may have become aggressive because the owner didn’t take it out enough.

‘Traits such as weight, height, cranial morphology, sex and age influence the interaction between dogs and their environment.

‘They may spend more time inside the home because of them, for example.’

The researchers hope the findings will highlight that dog behaviour isn’t solely down to the animal, and is instead a result of the interaction between the animal and its contect.

‘The environment and the owner-pet relationship, as well as morphology, are all factors that influence how pets interact with us and how we interact with them,’ said Professor Briseida de Resende, an author of the study.

Use food puzzles and blast classical music to help your pup shift the pounds, scientists say

As the Belgian Malinois is named the world’s most intelligent breed, experts reveal the DUMBEST dogs

How old is your dog REALLY in ‘human years’?

The often uttered statement that one dog year is equivalent to seven human years is false, according to a canine expert.

Instead, the equation is more nuanced and depends on a dog’s cognitive and behavioral traits over time as well as its breed.

A new study reveals a dog becomes a teenager at just six months old, is a fully-fledged adult by the time it is two years old and is a ‘senior’ at around seven.

A review of previous studies looking at the impact of dog age on pet health has been published in the journal Frontiers in Veterinary Science.

Dr Naomi Harvey, research manager at Dogs Trust and an academic at the University of Nottingham, conducted the review.

She says just because dogs live seven times shorter than humans does not mean each trip around the sun is worth seven for a dog.

‘Dogs mature more quickly than we do,’ Dr Harvey says.

‘Many one-year-old dogs have reached their full height and most will have gone through puberty or be approaching the end of it, so they’re definitely not the equivalent of a seven-year-old child!’

Instead of using the simplistic factor of seven equation, Dr Harvey sought to determine when a dog is a puppy, a juvenile, an adult, a senior and a geriatric.

Her findings show that a one-year-old dog is a juvenile just finishing puberty, and is akin to a 15-year-old human.

But just 12 months later, at two years old, dogs have reached full maturity in the same way as a 25-year-old person.

Dr Harvey found dogs can be considered to be entering their senior years at age seven and are deemed geriatric at age 12 and over. 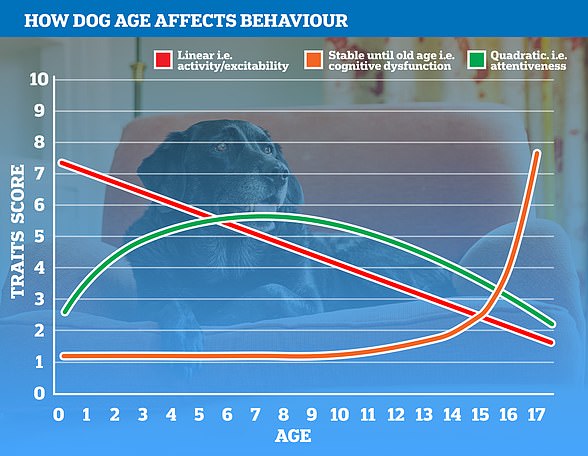 Pictured, how various metrics alter a dog’s behaviour over time. Green shows how the brain develops and then starts declining in senior years; orange shows how some traits, like cognitive decline, increase exponentially in a dog’s geriatric years; red shows the slow decline in a dog’s activity and attentiveness