Home » Where Does a Candle Go When It Burns?

Where does a candle go when it burns, anyway? Is it healthy to be breathing in melted candle particles? How concerned should I be?

When candles burn, most of their matter goes into the air.

The light and heat from a candle comes from the wax burning. When you light the wick, the flame causes some of the wax to melt, flow up the wick and evaporate, and then the wax vapor burns. The wick, which is made of cotton, also burns, although it’s the wax that contributes most of the heat. The puddles you sometimes see around the base are from wax that spilled and dripped down without burning. 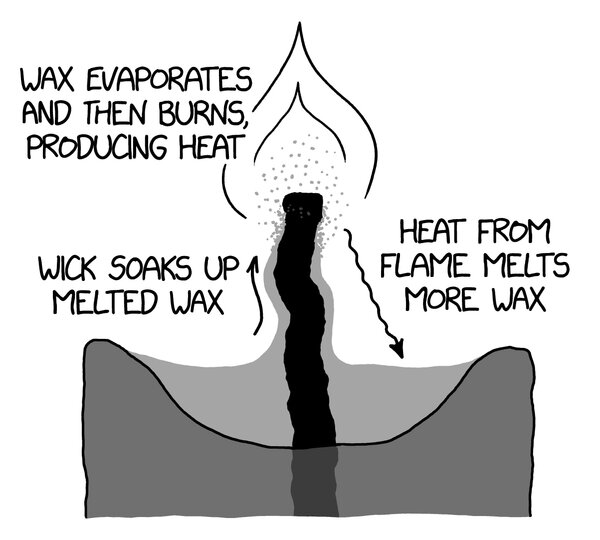 Wax is made of hydrogen and carbon. When a candle burns, the hydrogen and carbon from the wax combine with the oxygen in the air to become carbon dioxide and water vapor. Most of the matter in the candle ends up as these two gases.

Carbon dioxide and water aren’t exactly safe — too much of either can be extremely dangerous, as anyone who’s been on a submarine can tell you — but at low levels they are normal parts of the air. The amount of each gas produced by a candle is small — comparable to the amount that might be breathed out by another person in the room.

What's on Your Mind?

If there’s a science mystery keeping you awake at night, send it to Good Question.

If candles burned completely, every molecule from the wax would end up combining with oxygen to become CO₂ or water vapor, but candles don’t burn perfectly. Around the edges of the flame, clumps of carbon molecules — maybe 0.1 percent of the mass of the candle — are flung away before they finish burning, sort of like bits of food sprayed out by a kitchen mixer. These particles contribute to smoke and soot.

Aneta Wierzbicka, a scientist at Lund University in Sweden who studies indoor air pollution, has conducted a number of experiments to measure particle emissions from candle flames. “Candles, in homes without tobacco smoking, are among the most powerful indoor sources of particles, followed by cooking,” she told me.

She said that constant exposure to these tiny particles can lead to cardiovascular and respiratory diseases. For people who burn candles occasionally, the fire hazards are probably a bigger concern than the air pollution. But she said that if people burn a lot of candles on a daily basis, it’s worth taking steps to minimize exposure to airborne particles. She suggests making sure the room is well-ventilated, and using clean, white candles without too many additives or ingredients, since everything in the candle ends up in the air. (She also mentions that electronic candles have gotten quite good recently — at first glance, some of them can even fool a candle expert!)

As a candle burns, the CO₂ and water vapor it produces will cool and mix into the air in the room, becoming indistinguishable from any other molecule of CO₂ or water. Over the next few hours, as the air in your room is exchanged with the air outdoors, the molecules from your candle will escape the room and begin to disperse into the atmosphere. After about a year, atoms from your candle will have spread completely around the globe.

For the next few years, every time someone takes a breath of air, they’ll be breathing in a few carbon atoms from the wax and a few oxygen atoms from the air in your room.