Home » A Place in the Sun: Scarlette Douglas issues warning over guest’s demands ‘Work with it!’

A Place in the Sun: Scarlette warns house hunters of budget

Scarlette, 32, was on hand to help newlyweds Pam and Steve find their dream home in the Spanish region of Costa Blanco during the latest episode of A Place in the Sun. The pair were making a permanent move to the sunny seaside location and had a set of criteria for what they wanted from the property. The host of the Channel 4 programme set about conducting five viewings with the couple for homes within their budget of £160,000. However, when they began selling off more demands, the presenter had to issue a warning to ensure the guests kept level-headed.

What the pair wanted from their dream home was to find a property that contained three bedrooms, two bathrooms, garden space and an outside swimming pool.

With this in mind, Scarlette took the couple to property number one, which had four bedrooms and two bathrooms.

The house came with access to a communal pool and upon the first inspection, Steve told the presenter it felt “a bit enclosed”.

They also didn’t like the noise of the traffic but the host explained the establishment was on the market for £135,000.

An even better incentive was that the agents selling the house said they could get the cost closer to £126,000. 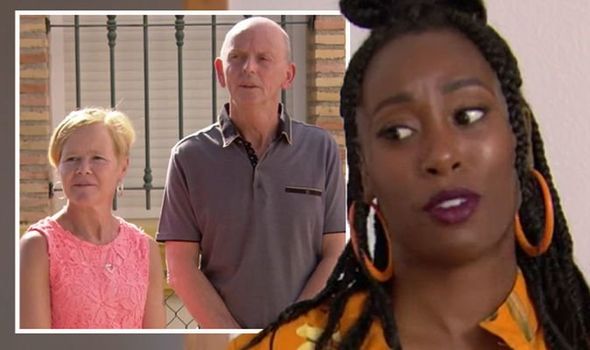 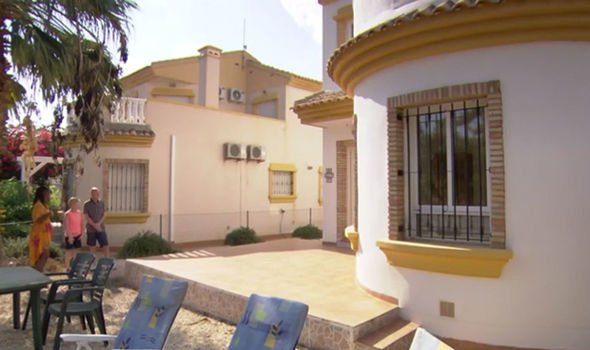 The couple were keeping an open mind but as soon as they stepped inside, Steve expressed his disappointment over the property.

“You’re hard to please, aren’t you?” the host joked as his wife, Pam, was keen to see more of the establishment.

However, by the end of the viewing, the pair agreed they were going to rule it out as a contender and so Scarlette moved on to property number two.

Instantly the guests said they preferred it “a lot more” and on the market for just under £152,000, it was within their budget.

With one of the three bedrooms opening up onto a sun trap terrace, Pam said she felt goosebumps thinking about living there. 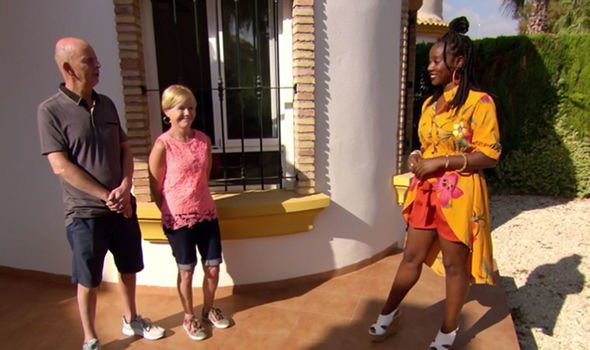 Got a budget to work with

“It’s the dream,” she told her husband as Scarlette said she was pleased the couple were happier as her “heart sank” with property number one.

The presenter concluded the viewing by asking the pair what she could improve on with the next property and they soon made a list of demands.

Pam said: “I like most of it but I think maybe an ensuite with the next property and you never know, maybe a little pool.

Steve added he would have liked a “bigger bathroom” and the presenter quipped: “Adding a few more bits there, aren’t we?”

Issuing a warning, the presenter told her guests: “We have got a budget to work with Pam and Steve but I will try my best.” 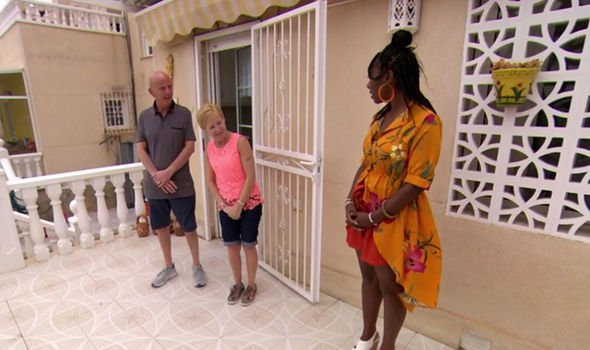 Scarlette moved on to property number three which had a private pool and lots of outside space for Pam to use for gardening.

The three-bedroom detached villa was located in a peaceful and quiet spot, surrounded by the views of the Spanish mountains.

Although they liked the views, when they walked inside of the property, the pair were disappointed and they couldn’t move past it.

Even the asking price of £146,000 was not enough to win the husband and wife one so the presenter swiftly moved on to property number four.

A three-bedroom villa was next on the cards and was sat on the market for an asking price of £150,450 at the time of filming.

The property contained a good size pool, great garden space, and a roof terrace, with the front door leading into the kitchen and lounge area.

What Steve was concerned about was how close the property was positioned to that of their neighbours and whether there would be noise pollution.

He wished there was more space between the houses and unable to move past it, the guests turned it down as a contender.

This left one more house to view as Scarlette had exhausted all avenues to try and find the couple their dream home.

Property number five was another three-bedroom villa and from the outside, the couple were impressed by their first thoughts.

They ventured inside and were equally, if not more so, pleased with what they were seeing and they enjoyed exploring this option.

The pair told Scarlette there was another contender in the bag but would need the night to sleep on their decision.

Meeting with the presenter, the couple went through the pros and cons of all the properties they saw and whether they would put in an offer.

Unfortunately, neither property number two nor number five did enough for the gusts to take a risk, leaving the host devastated.

A Place in the Sun airs weekdays at 4pm on Channel 4.