With new music in the pipeline, Mark Owen was keen to tease what fans can expect when he joined Jon Kay and Sally Nugent on the BBC Breakfast sofas on Monday. And while the news of new music will undoubtedly excite Take That fans, it seems many were more concerned with Mark’s new look – one that is worlds away from his days in the boy band.

In fact, Sally addressed Mark’s new look outright, probing the singer about why he now dons a moustache.

Referring to his Take That days, Dally asked: “Actually, you look different. The moustache, how long has that been there?”

Mark replied: “It’s been there for about four years probably. It started off as a beard and then my beard got a bit patchy on this side. Then we were going on tour, and beards can get a bit sweaty on tour…”

Sally interrupted to then jokes about co-host Jon’s facial hair, to which he chimed in: “Yeah, yeah, patchy beards, I’m with you, Mark.” 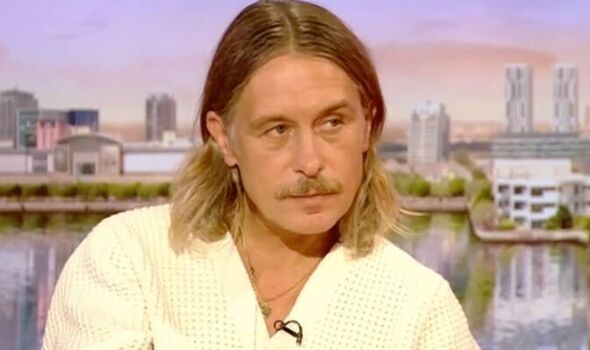 Sally let out a chuckle as Mark continued: “So then it became a moustache and it sort of stuck.

“My children keep threatening to cut it off, they’re like, ‘Can we just…?’

However, some weren’t happy that Sally had decided to quiz Mark on his look.