A stirring animated documentary, director Jonas Poher Rasmussen’s “Flee” recounts the treacherous trajectory to safety of Amin (a pseudonym to protect the subject’s identity) from his native Afghanistan to Denmark. More than a safe vehicle to share the harrowing and touching real-life account, animation provides a narrative language with distinct aesthetic dialects that allows for the factual past, his sensorial memory, and the present to converge.

An awards contender in multiple categories this season, the film benefits from the synergy between the artistic choices and the thematic substance of the story. Below, key members of the creative team at Sun Creature Studio — animation director Kenneth Ladekjær, art director Jess Nicholls, and character designer Mikkel Sommer — share details on the making of this one-of-a-kind blending of mediums.

To design the animated iterations of Amin and his family, Sommer and Ladekjær had access to photos of them, but their task entailed balancing faithfulness to their likeness while preserving their anonymity and creating an Afghan family “that feels connected to Amin,” as Ladekjær puts it.

“I had early development sketches of the main character where he was more stylized,” noted Sommer. He eventually opted for a less cartoonish aesthetic to better complement the narrative. “To tackle a family pulled apart in Afghanistan, I had to put in a lot of work to not simplify them in the wrong way.” 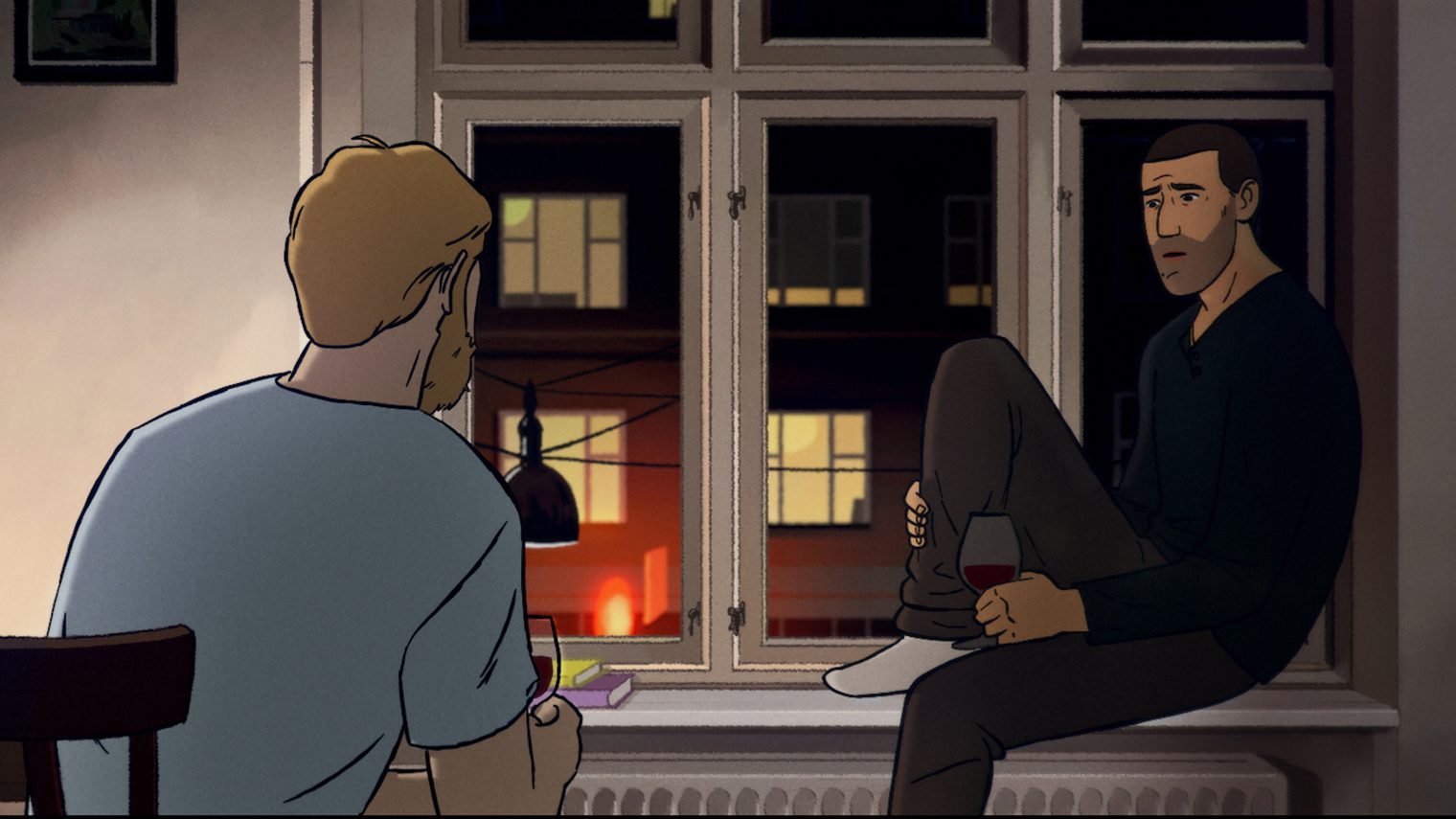 Amin and Kasper in “Flee”

For Sommer, “Flee” demanded something he’d never done before: drawing multiple characters at different ages. This was particularly true of the protagonist, whose arc is tracked from age six to his adult years. When doing a series of motion drawings of Amin at different stages of his life, the character designer had to consider his emotional state, such as his innocence as a child in Kabul and later the repression he underwent in Moscow.

“How do you convey a person’s inner world in just a drawing of their face? You had to have a feeling that he’s someone who maybe has more than he lets on or has a history he maybe doesn’t want to talk about,” said Sommer. “It’s a lot to put in a design, but it’s important to think about these things when you design facial features and posture.” Ultimately, Sommer understood his static designs could only partially evoke such complex emotions. The responsibility to get them all the way there fell on the storyboarders and animators.

Ladekjær only met Amin briefly at a birthday party once production had been completed. Nevertheless, he had seen him in the footage where he is laying on a couch being interviewed. Initially, Poher Rasmussen hoped to make a hybrid piece with those live-action images of the conversation, only deploying animation for his memories of Afghanistan. But when Amin requested that he remain anonymous, those sections also became animated. To keep the real-life Amin as secret as possible, Ladekjær animated the interview shots himself.

“I had that as a reference in terms of how he moves, how he gestures, how he acts, but we never used it to trace him or do rotoscoping,” said Ladekjær. “We wanted the animation to feel handcrafted and not like a filter on top of our reality. It should have a connection to humanity, rather than just being an optimization of that narrative.”

The artistic mandate to animate the rest of characters and the world was to similarly avoid the extreme expressions the medium often uses to convey emotion. “It was also important to let the animation leave space for Amin’s real voice to tell the story and not have it dictate, ‘This how you’re supposed to feel now,’ or ‘This is how you’re supposed to think of this moment,’” said Ladekjær. “But instead have it be a subtle support for Amin’s voice, so that his emotions and his way of telling the story comes through.”

The core animation team behind “Flee” consisted of around 10 animators and 10 cleanup artists in Denmark, and a team of coloring artists in France. Each scene would go through a rough pass of animation where the team checked the acting of the characters and the intention. Once Poher Rasmussen approved it, the animators would tighten up the drawings in terms of the look of characters. The cleanup team would then check for the correct brushwork — meant to seem inky and sketchy as if from a graphic novel to give maturity to the line work — before finally shipping it off to the coloring team to embellish the characters. “It was a pretty big machinery,” noted Ladekjær.

There was also a specific team handling the more abstract or blurry memory sequences, led by Simon Rouby, who was in direct contact with Poher Rasmussen. For his part, Ladekjær appreciated the division of labor. “To have someone else deal with this so it didn’t go through my supervision, but went straight to Jonas, made sense because those scenes were so directly connected to the emotion of those moments,” he said. “We experimented in the beginning of maybe doing it on paper, with charcoal and then scanning it, but in the end we actually got the same result from doing it digitally, having more control of it.”

Portraying Amin’s formative days in 1980s Kabul as accurately as possible proved strenuous since those events occurred before media was digitized. Digging into news footage, as well as books and maps found in libraries, became Nicholls’ way into rebuilding parts of the city in animated form. Young Amin’s bedroom was especially tricky to capture.

“That was a hard one, because we didn’t know how much access to media they would have had at the time. We had to go off a lot of what Amin said himself was in the room,” noted Nicholls. “Later we found some archive footage of two boys playing in front of a wall covered in posters in a room. But we didn’t find that until after we’d already done that section. So it was a bit like, ‘Thank gosh, we’ve managed to work our way to the right thing actually.” 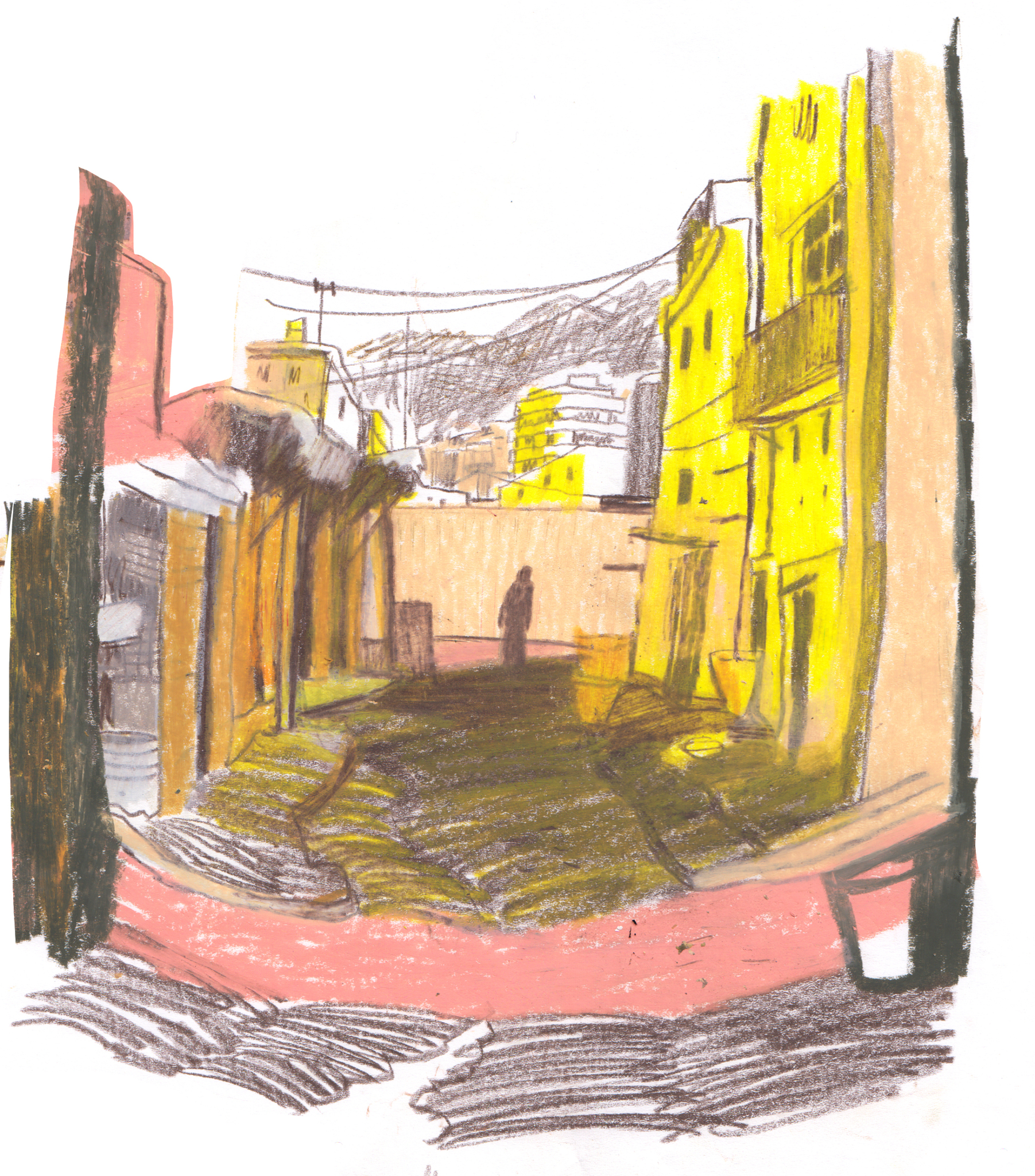 In addition to photographic and filmic references, the team also involved people from Afghanistan who, like Amin, had escaped to Denmark around the same time period.

“They came and watched that first part of the film set in Afghanistan to make sure that there weren’t any points where they felt like, ‘Oh, that feels really off. That’s not how it would be,’” explained Ladekjær. “And just to make sure that we weren’t going off the realism and that we stayed true to it, so that’s if you’re in Canada as a refugee from Afghanistan, from that period, you would be able to see it, recognize it, and feel seen. That was very important for us knowing that it’s a true story.”

On the surface, the Russian sequences were easier to conceive because Nicholls and Ladekjær found more documentation of the period details. Conversely, however, the precarious Moscow apartment where Amin and his family spent a long period waiting to depart for Western Europe presented spatial complications.

“Because of how limited the space is and because there are so many scenes that are set there, that was really tough,” explained Nicholls. “It was like filming in a closed box, but we weren’t allowed to remove a wall to make room for the camera to go a little bit further back.”

The solution came in creating a 3D sculpt of the Russian apartment to test the angles they could shoot from and how the camera would behave in those parameters. “That really gave us a sense of, ‘If the camera was actually here, how would that look with this lens or that lens?” said Ladekjær.

Even as hurdles like these emerge, the dogma that Ladekjær and Poher Rasmussen agreed on for the film’s cinematography responded to humanism.

“We always wanted to, as much as possible, keep the camera at eye level so that you stay on a human viewpoint while experiencing the film,” said Ladekjær. “We also tried to stick to doing only what a real camera can do. In animation you shoot through really orchestrated angles and compositions, but we wanted to keep it really simple so it still felt like a documentary.”

In Moscow, Amin and his family are often seen watching a colorful Mexican soap opera. Unable to get the rights to the actual show (1989’s “Simplemente Maria”), the director rewrote some of the scenes based on the original plot. For those snippets, the team deliberately animated the characters to overact, so that the fiction on TV contrasted the real world of their story. Ladekjær recalls he and Poher Rasmussen would often joke that their next project should be to animate a full-length version of the telenovela they created for “Flee.”

On Working with a Live-Action Editor

“There was a back and forth between storyboarding and editing because we had an editor that came from live action,” explained Nicholls. Editor Janus Billeskov Jansen, a close collaborator of director Thomas Vinterberg on “The Hunt” and the Oscar-winning “Another Round,” requested changes to the storyboards once the team had already finished them. In animation, typically all the shots are locked in the storyboard before building animatic, and definitely before a single frame is animated.

Here, however, Nicholls and Ladekjær had to be more flexible to accommodate the needs of Billeskov Jansen. “What made the film really strong for us in the end was this very dynamic storyboarding process,” added Nicholls. A storyboarder would create some panels and send them off to editing. The editor could then come back and say, “Hey, I need a close-up shot of this guy’s face saying these things,” prompting them to quickly draw those panels. This resulted in a spirited process distinct from the more familiar rigidness of setting things in stone early on. “Animation and live action can learn a lot from each other,” said Nicholls about this unique partnership.

“I imagine Jonas was more used to getting a lot of footage in, and then you build the film from that,” added Ladekjær. “And for us, having to open up the film again and editing this way was actually really interesting. It’s something I would like to keep doing as much as possible with animation in the future.”