Before landing the starring role as Jill on “Mom” in 2014, Jaime Pressley appeared in a variety of hit movies and TV shows in the 2000s, including “Can’t Hardly Wait,” “Not Another Teen Movie,” “I Love You, Man” and “My Name Is Earl,” which not only made her a household name but won her an Outstanding Supporting Actress Emmy in 2007. During that decade, Pressly was also romantically linked to a handful of famous men. According to Famous Fix, the actor dated Mario Lopez, comedian Simon Rex, Carson Daly, Jennifer Lopez’s ex-husband Cris Judd, and Kid Rock.

The website reports she began dating her longtime friend Eric Cubiche a few years later, which eventually turned into an engagement. They later welcomed a son named Dezi in 2007, but ended their relationship in 2008. In September 2009, Pressly married entertainment lawyer Simran Singh, but she filed for divorce less than two years later, as per Us Weekly. After the split, sources said she married Singh “too fast.”

It turns out, everything happened as it was supposed to because it led her to her current boyfriend. Scroll ahead to find out about Pressly’s relationship with Hamzi Hijazi. 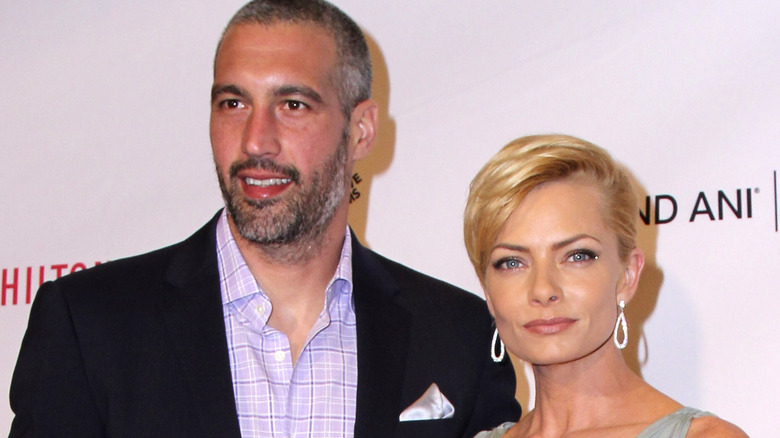 Jaime Pressly and longtime boyfriend Hamzi Hijazi met in 2011 at his shoe store in Santa Monica, California, just a few months after she finalized her divorce from Simran Singh. The actor described their first encounter as serendipitous, telling People, “I literally walked into the shoe store with my girlfriends one day shopping and there he was, so it was a kismet kind of thing. It was great.” They’ve been together ever since.

In early 2017, the “Mom” star announced that she and Hamzi were expecting twin boys after trying “for quite a while” to get pregnant, as per People. She welcomed her babies later that year. “He was meant to be a dad,” she once gushed to Us Weekly about Hamzi. “It’s been incredible being able to do this together.”

Pressly also doesn’t waste an opportunity to shower her partner with kind words via social media — particularly on Father’s Day, every year. In 2018, to celebrate his first as a dad, she wrote: “Thank u for giving me our 2 beautiful boys & for being such an amazing step father to Dezi. I couldn’t have picked a better man for the job.” It’s unclear if marriage is in their future, but the pair’s relationship seems stronger than ever.