Home » TV & Movies » TV Is Starting to Cut Ties with Trump, as His Legacy Wreaks Havoc on Reality

Amid the chaos and tragedy of Wednesday afternoon, an unexpected concession was made. President-elect Joseph R. Biden asked President Donald J. Trump to go on TV and give a speech to the American people, and the typically uncooperative POTUS — technically —  did just that.

Years, if not months, earlier such a clear-cut request and response could’ve been seen as a justifiable rationale to air Trump’s pre-taped address without warning or censorship. The Capitol was under siege by Trump supporters, and any attempt to end the violence was worth a shot. Plus, who would call out cable or network news for showing something both presidents wanted the country to see?

But on Wednesday, after years of putting Trump’s speeches through exhaustive fact-checks and suffering through power-hungry ratings ploys, the news anchors proved a bit smarter than that.

It certainly helped that the speech started with a lie (though whether it was referred to as such, or instead labeled a “baseless assertion,” depends on who you heard describe it). Trump, trying to connect with his already devoted gang of domestic terrorists, claimed at the onset “we had an election stolen from us.” After the video ended, CNN’s Jake Tapper said, “I also want to note that in that video, he lies about the election being stolen and pours more fuel on the fire. […] He continues his shameful behavior of lying to his supporters about what happened. It is absolutely disgraceful. I feel ambivalent about the fact that we even aired it.”

There was no ambivalence on CNBC, where Shepard Smith shouted for his producers to “Stop the tape” before its minute-long runtime elapsed. “That is not true, and we are not airing it,” he said. Other networks didn’t air the video at all, while still others claimed to be duty-bound to let the riot leader try to calm his rioters. Meanwhile, the arguably more-powerful social media sites of YouTube, Facebook, and Twitter all deleted the video entirely. (Calls to ban Trump from the latter two platforms have yet to be acknowledged, despite his continued propagation of hate speech.) 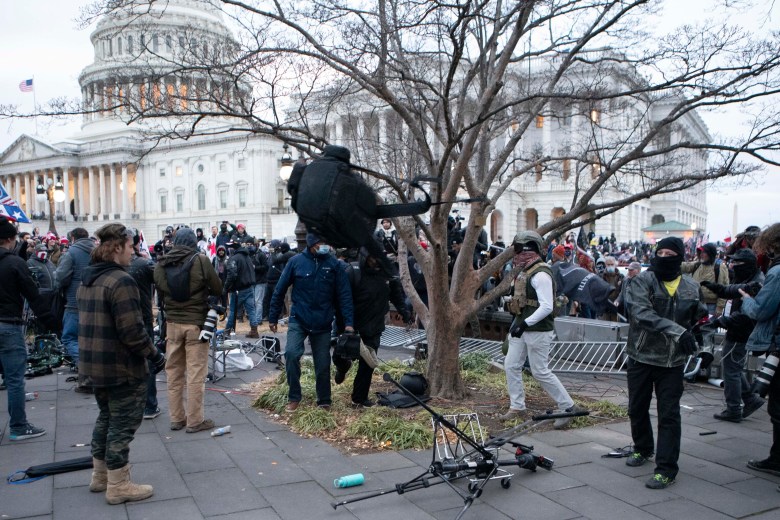 Protesters break television equipment outside the the U.S. Capitol on Wednesday, Jan. 6, 2021.

Would it have been better for the networks to follow suit and not air Trump’s video at all? Most likely, yes. Like a TV villain who gets too many chances by the kind-hearted protagonist, everyone should know by now that Trump is incapable of denouncing even his most despicable supporters. But the clarifying remarks made surrounding the video, as well as calls like Chuck Todd’s to avoid glorifying the terrorists’ behavior by showing their photos from inside the Capitol, stand as progress for TV news. When Trump was running and first elected to office, reporters were drawn to his asinine antics like moths to a flame; the unprecedented nature of his presidential behavior was too unbelievable to disregard, so they didn’t.

Now, they are — or they’re trying to, at least. That could be because they’ve learned from their mistakes, slowly realizing that feeding a beast who thrives on ratings is a gradual way to get eaten alive. Or perhaps they’re a bit quicker to call out a lame duck president, knowing they won’t have to put up with him for four more years. (Major networks cut away from his election week speech, when he baselessly tried to undermine the results they’d already recognized as accurate.) Or, and this is entirely possible, it just feels like national pundits are putting Trump in their rearview because we’re all eager to do the same thing.

But Wednesday’s events and the infuriating reaction showed the fine line media has to walk moving forward. Trump, his message, and their combined toxicity need to be cut out of the discourse. His office and title are no longer reason enough to justify coverage, and the droves of invaders swarming the Capitol were a terrifying example of what happens when his manipulative pity parties are given a national platform. Too many people only hear his words, and they miss the anchor explaining why they’re wrong.

At the same time, the consequences of Trump’s tenure demand not only our attention but a quick and assertive response — and as contradictory as those goals may sound, they are distinct. Trump isn’t going to just quietly sulk off into the sunset, and even if he did, he’s already activated a following that’s angry and eager to act out. Keeping Trump off TV won’t magically put out the fire, but it will cut out some of the oxygen feeding it. When the flames inevitably erupt, as they did Wednesday, the response has to be better than the cops taking selfies with terrorists; there has to be more decisive action taken to defend America than there was to defend American property. (Despite what Republicans claimed later that night, Wednesday most clearly illustrated the police force’s appallingly inequitable treatment of white and Black protesters.)

In other words, it can’t feel like those in charge of protecting democracy are just sitting around watching TV. Most people watching at home are helpless to do anything, but the cop staring at the same cell phone we are doesn’t need to be taking a picture or checking the news. He needs to be taking action. This kind of tepid response to a nightmare scenario — the last time I watched bombs be placed in the Capitol, it was on “Designated Survivor” — led to growing panic and immense frustration. Once video surfaced of officers parting the barricades to let the Trump supporters through, many onlookers said they’d had enough. After an afternoon spent watching TV, they walked away or changed the channel.

The media doesn’t have that option. They have a responsibility to cover the news in its entirety, and aside from a few notable mistakes (like not airing that video of the gates being opened), they did just that on Wednesday, from noon to well past midnight. Many of us couldn’t stop watching, which made it all the more important that Trump’s rhetoric wasn’t given additional airtime. That’s a start. Someday, hopefully, the fallout will fade from the airwaves, as well. But only when it’s been addressed, not appeased.