Britain’s first floating eco-village with futuristic homes, shops and ‘work-pods’ is planned for disused Cardiff dock that was once the busiest in the world

Britain’s first floating eco-village is being planned for a disused dock which was once the busiest in the world.

Futuristic homes, shops and ‘work pods’ would be set up on the waters of the Welsh docks which bustled with ships from the around the world during the Victorian era.

The ‘waterworld’ village is being proposed by developers for the disused Bute East dock in Cardiff, built to handle Britain’s booming coal exports.

The dock opened in the 1850s to handle the giant coal trade from the Welsh Valleys powering the British Empire.

It closed to ships in 1970 – but the dock edge is now a popular spot for walking and fishing, surrounded by waterside apartments. 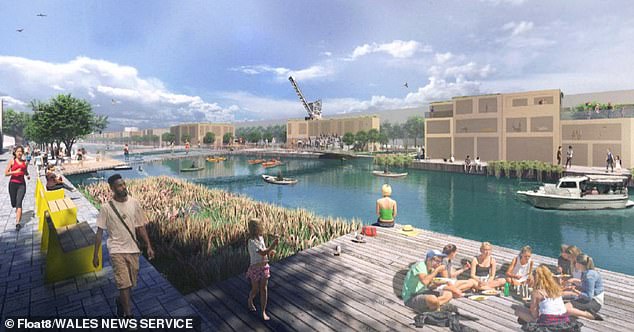 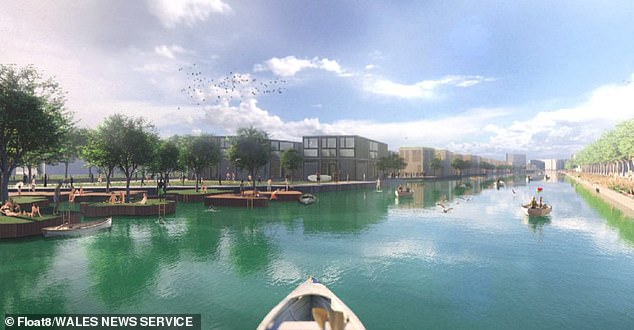 A total of 45 acres of water were enclosed by a two-gate lock when it was completed in 1859. Pictured here is how developers Floating8 hope the eco-village will look if it gets the go ahead

It would be the ‘first of its kind’ in Britain – bringing life to the huge expanse of water as well as the dockside.

A spokesman for Float8 said: ‘We can confirm Float8 is in ongoing exploratory discussions with the owners of a redundant dock in Cardiff regarding a first-of-its-kind in the UK floating artisan village proposal at the Bute East Dock.

‘Discussions are still in early stages of outline development and we are not in a position to disclose detailed information, other than our proposal includes a mixed-use floating scheme combining public realm space, floating homes, floating offices and retail space.’

A new multiplex cinema and leisure complex was built nearby as part of the massive regeneration of docklands all around Britain. 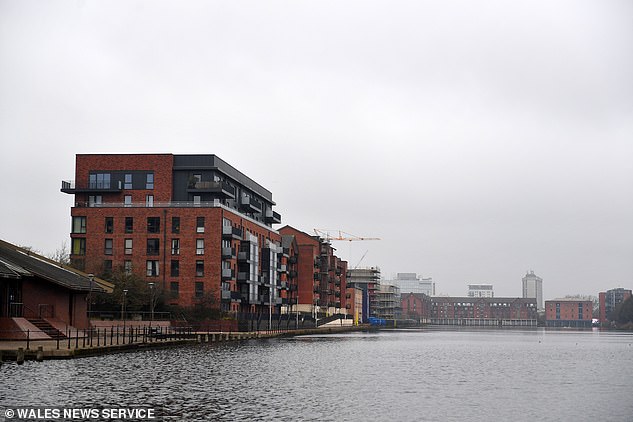 Bute East dock opened in 1850s to handle the giant coal trade from the Welsh Valleys powering the British Empire in Victorian day. Pictured here is how the dock area looks at the moment

But now the developers want to put fresh life on the water as well – to add to a masterplan to bring new homes and a 15,000-seater arena to Cardiff Bay.

The spokesperson added: ‘With a team of experts in both property development and nautical activities, the Float8 vision stems around creating great places to live, work and play on water, connecting residents to the water’s wellbeing benefits, and always with protection of the environment for future generations at the heart of everything we do.

‘Float8 is looking to work with the local authority and local residents in delivering a scheme which provides next-generation living on water.’

Float8 is also talking to councils in other parts of the country about building ‘floating villages’ on harbours, canals, docks and lakes elsewhere.

An ABP spokesperson said: ‘We are working with Cardiff council to assess the best options for future opportunities on Bute East Dock.

‘The council’s recent decision to appoint a preferred developer for the arena, together with Atlantic Wharf master planning, presents an excellent chance to consider development opportunities for the dock.

‘ABP considers these wider development proposals as the next exciting chapter in the history of the transformation of the Bay. We are still at an early stage of the process and have not appointed any parties to provide advice on a scheme at this time.’

The Bute East Dock was constructed to cope with massive demand for coal and opened by the 12-year-old Third Marquess of Bute on September 14, 1859 – and he is reputed to have become the world’s richest man within his lifetime.

The new dock was 1,310m in length and up to 152m wide surrounded by railway sidings and large warehouses.

Its opening in 1859 resulted in coal supplanting as the industrial foundation of the South Wales, with exports reaching 2 million tons as early as 1862. 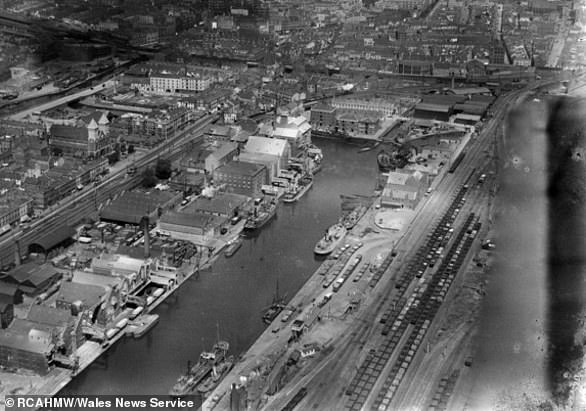 Pictured: Bute East Docks before it closed down in 1970

A total of 45 acres of water were enclosed by a two-gate lock and fifteen coal staiths erected, allowing 1 million tons of coal a year to be handled at this dock alone.

The dock was closed in 1970 and the railway sidings were removed.

The only original building fronting the dock to survive is the Bute Warehouse.

It was rebranded as Atlantic Wharf after 1980 – including new housing, new businesses, hotels and the conversion of three large derelict dock warehouses into fashionable apartment.