Employers are under pressure to cut ties with Stonewall today after a ‘gender-critical’ lesbian lawyer won a landmark employment tribunal case that involved the LGBT rights charity.

Allison Bailey accused her employer Garden Court Chambers of withholding work from her and trying to crush her spirit after she criticised Stonewall’s trans policies, including recommendations to change pronouns from ‘she and he’ to ‘they and their’.

Ms Bailey’s gender-critical beliefs include that sex is biological and cannot change, and that the word ‘woman’ is defined as ‘adult human female’.

Yesterday she won her case for discrimination against Garden Court – but lost her case against Stonewall, which she had branded a ‘malign influence’ in British society and workplaces.

Ms Bailey had complained to colleagues in 2018 about her chambers signing up to Stonewall’s Diversity Champions scheme, under which employers pay Stonewall for advice on how to implement equality laws and policies. She claimed Stonewall advocated ‘trans extremism’ and was complicit in a campaign of intimidation of those who questioned gender self-identity.

A host of public bodies and employers – and formerly the BBC – are signed up to the scheme. The BBC left the scheme last year, whilst the likes of Channel 4, Ofsted, the Cabinet Office and the Equality and Human Rights Commission have also left.

Following Ms Bailey’s partial victory yesterday, Brendan Clarke-Smith, the minister for children and families, said the Department for Education left the diversity champions scheme in February, after a ‘decision was taken not to renew membership’.

Critics also piled in to take aim at the charity’s scheme. Well-known feminist Julie Bindel claimed: ‘Remember, any employer that follows the Stonewall law is at risk of breaking the actual law and could end up in an employment tribunal. Stonewall is finished.’

And campaigner Maya Forstater, who won her own legal fight after losing her job when she tweeted that ‘men cannot become women’, said the scheme had been shown to be ‘meaningless’ and is ‘just a £3k payment to use the logo’.

She added that she believes that Diversity Champions could be ‘withdrawn and scrapped’, along with Stonewall’s ‘Workplace Equality Index’, which ranks firms and bodies according to how they are deemed to be performing on achieving equality for their LGBT staff.

A series of revelations about the beliefs of Stonewall staff have emerged in recent years.

Metcalf told the tribunal: ‘Bodies are not inherently male or female. They are just their bodies.’ The comments sparked a Twitter storm and severe criticism.

Stonewall also supports the belief that people with penises can be lesbians and those with vaginas can be gay men. Its chief executive, Nancy Kelly, last year likened ‘gender critical’ beliefs to antisemitism.

The charity has backed campaigns for the law to be changed to allow ‘self-identification’ of gender, meaning that a person who was born male could obtain the legal status of a woman simply by describing themselves as female.

It comes after Stonewall was criticised this month for claiming that children as young as two can recognise if they are transgender and that nurseries should teach that idea. 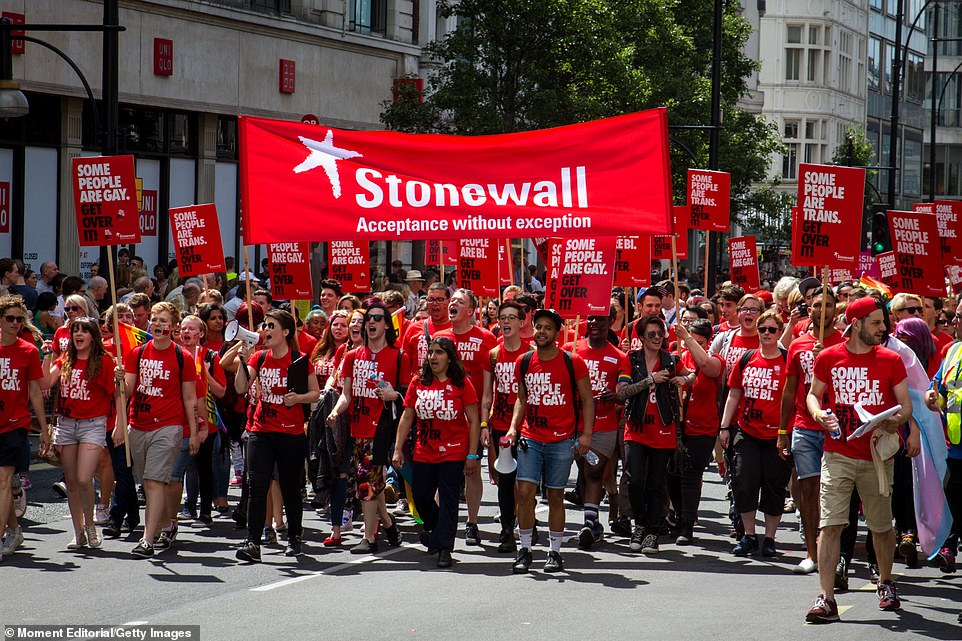 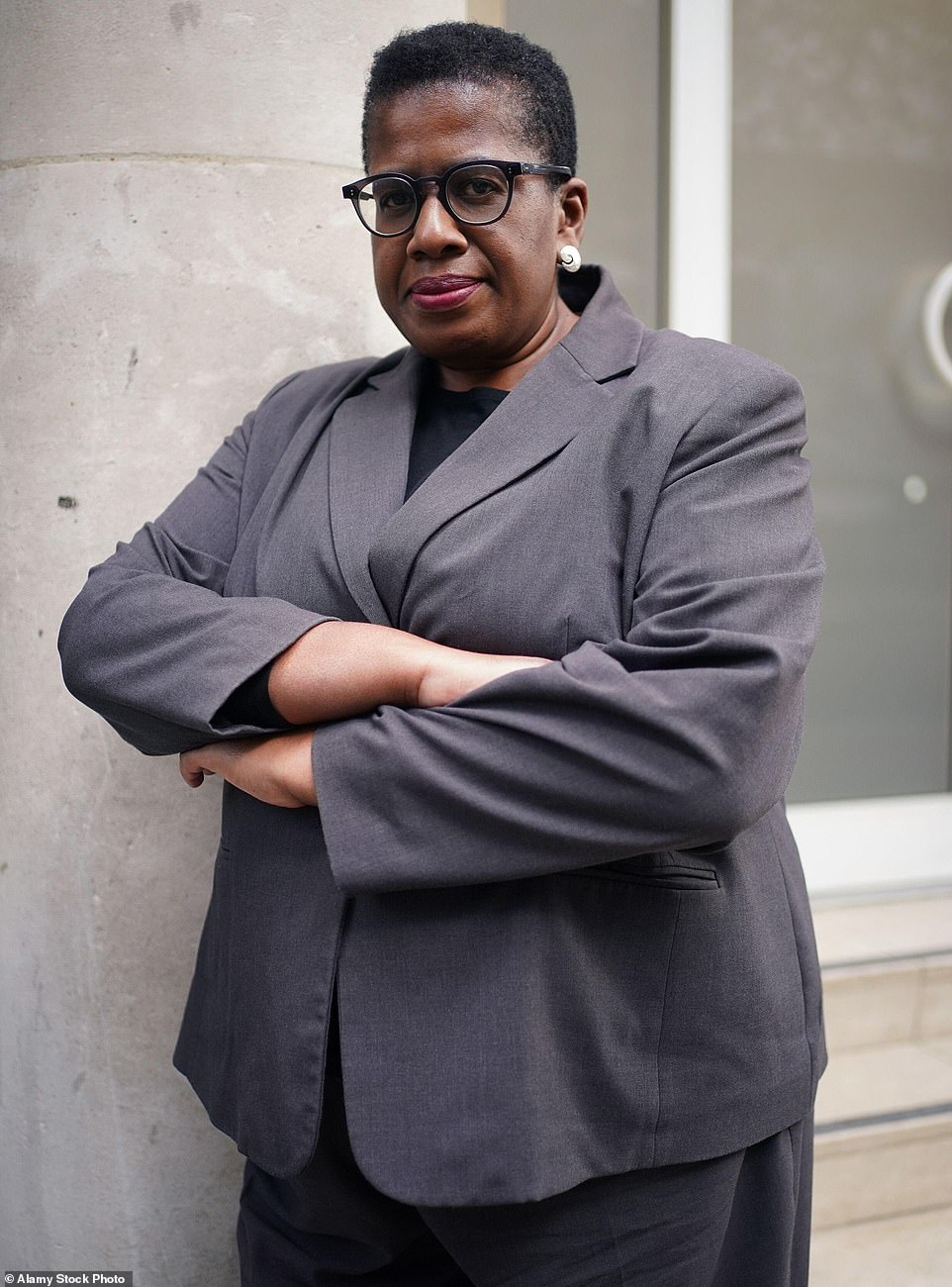 Allison Bailey (pictured) accused her employer Garden Court Chambers of withholding work from her and trying to crush her spirit after she criticised Stonewall’s trans policies, including recommendations to change pronouns from ‘she and he’ to ‘they and their’. Ms Bailey’s gender-critical beliefs include that sex is biological and cannot change, and that the word ‘woman’ is defined as ‘adult human female’. Yesterday she won her case for discrimination against Garden Court – but lost her case against Stonewall

After her legal victory yesterday, Harry Potter author JK Rowling, who is a friend of the lawyer, said: ‘Allison Bailey is a heroine to me and innumerable other feminists for refusing to abandon her beliefs and principles in the fact of intimidation and discrimination. Congratulations’. She added: ‘And I couldn’t be prouder of my friend’.

Ms Bailey founded the LGB Alliance group, which argues there is a conflict between the rights of lesbian, gay and bisexual people, and transgender people – and opposes many of Stonewall’s policies, including the assertion that ‘trans women are women’.

The chambers said it is ‘reviewing the judgment carefully with our legal team with a view to appeal’.

A Stonewall spokesperson said: ‘We are pleased that the tribunal ruled that Stonewall has not been found to have instructed, caused or induced (GCC) to discriminate against Allison Bailey.’

Stonewall began as a campaign group for gay rights and had previously been applauded for its work.

However, in recent years it has been criticised for its acceptance of allegedly dubious claims related to transgender people and biological sex.

Last year, it emerged that Stonewall attempted to suppress a BBC investigation into claims that predatory transgender women had been pressuring lesbians for sex.

The investigation cited three lesbian women who said they feared being labelled ‘transphobic’, and risked being shunned and threatened by the gay and trans community if they refused to take trans women as partners.

They told journalist Caroline Lowbridge they felt under a bizarre form of pressure to ‘accept the idea that a penis can be a female sex organ’.

The article was published on the BBC’s website and was praised by some lesbians who said they felt ostracised for wishing to form relationships only with women.

The article included a controversial argument made by several trans activists that expressing any preference in sexual partners should be considered ‘discriminatory’ as such preferences often exclude trans people.

This is sometimes referred to as ‘the cotton ceiling’ – a distasteful reference to underwear suggesting that trans women are systematically blocked from having sexual relationships with biological females.

Months before the article appeared, Stonewall’s chief executive Ms Kelley wrote to the editorial director of BBC News and suggested that the article would end up being ‘transphobic’ because it represented trans women as ‘sexual predators’, which was a ‘central anti-trans argument’.

She further complained that the ‘highly toxic’ cotton ceiling issue was ‘analogous to issues like sexual racism’.

Earlier this month, Stonewall was slammed for a tweet that read: Research suggests that children as young as 2 recognise their trans identity.

‘Yet, many nurseries and schools teach a binary understanding of pre-assigned gender. 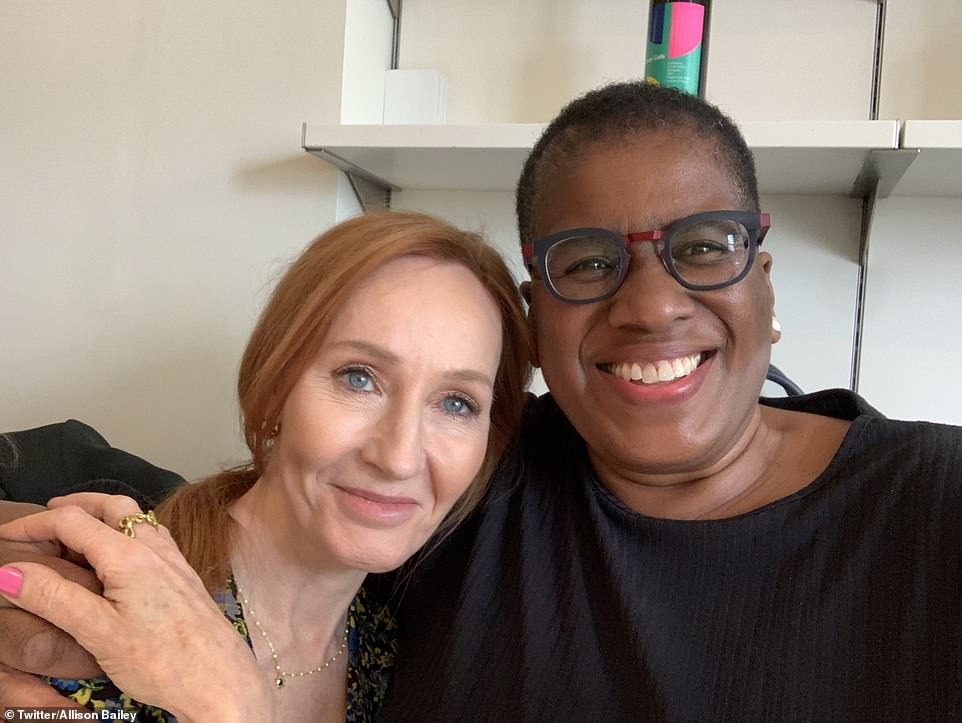 Allison Bailey accused LGBTQ charity Stonewall of operating ‘like a criminal protection racket’ by persuading firms to follow its transgender policies. Pictured: Harry Potter author JK Rowling with Ms Bailey during a lunch with other prominent feminists in London in April 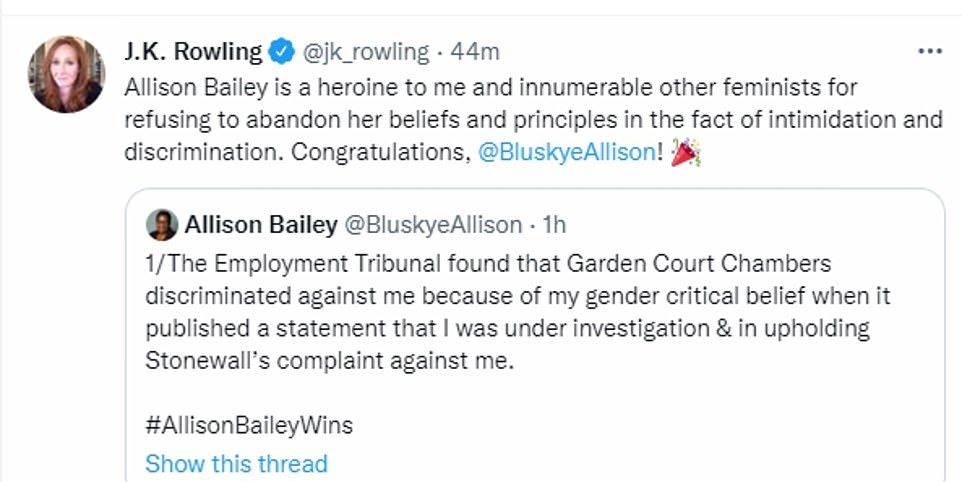 ‘LGBTQ-inclusive and affirming education is crucial for the wellbeing of all young people!’

The tweet was posted above an article about a ‘non-conforming’ four-year-old whose nursery allegedly did not respect their feelings.

‘While we don’t actively work on nursery education, we believe that young children should be able to play, explore and learn about who they are, and the world around them, without having adults’ ideas imposed upon them.

‘We support existing provisions to ensure primary and secondary school pupils learn about LGBTQ+ identities in an age-appropriate and timely manner.’

However, scores of public bodies and government departments – as well as many private companies – still have links to Stonewall through the diversity champions scheme.

Government departments that are still believed to be signed up include the Treasury and the Ministry of Defence.

Earlier this month, Stonewall was slammed for a tweet that read: Research suggests that children as young as 2 recognise their trans identity. Yet, many nurseries and schools teach a binary understanding of pre-assigned gender. LGBTQ-inclusive and affirming education is crucial for the wellbeing of all young people!’

At the start of this year, the Department for Business, Energy and Industrial Strategy (BEIS) severed ties after a review.

Last year, the Ministry of Justice and the Department of Health also quit the scheme.

Other organisations that have left the scheme include Ofsted, Ofcom, and the BBC. Announcing the corporation’s decision last November, a BBC spokesman said: ‘The BBC is fully committed to being an industry-leading employer on LGBTQ+ inclusion. We are proud of our lesbian, gay, bisexual and trans colleagues and we support them to have fulfilling careers at the BBC.

‘Along with many other UK employers, the BBC has participated in Stonewall’s Diversity Champions Programme to support our objective to create a fully inclusive workplace. However, over time our participation in the Programme has led some to question whether the BBC can be impartial when reporting on public policy debates where Stonewall is taking an active role.

‘After careful consideration, we believe it is time to step back from the Diversity Champions Programme and will also no longer participate in Stonewall’s Workplace Equality Index.

‘Being a part of the Diversity Champions Programme has never required the BBC to support the campaigns of Stonewall, nor its policy positions. As a broadcaster, we have our own values and editorial standards – these are clearly set out and published in our Editorial Guidelines. We are also governed by the Royal Charter and the Ofcom Broadcasting Code. Our journalists continue, as ever, to report a full range of perspectives on stories.

‘Although the BBC will not be renewing its participation in the Diversity Champions Programme, in the future we will continue to work with a range of external organisations, including Stonewall, on relevant projects to support our LGBTQ+ staff.’