Less than three months after she was returned to Australia, one of the so-called “ISIS brides” has been charged after police said they had new evidence she had willingly entered Islamic State territory in 2014 and knew of her husband’s activities with the group.

Mariam Raad, who now lives in Young in the state’s South West Slopes, was arrested on Thursday morning after properties were searched at Young and Parklea in Sydney’s north-west. 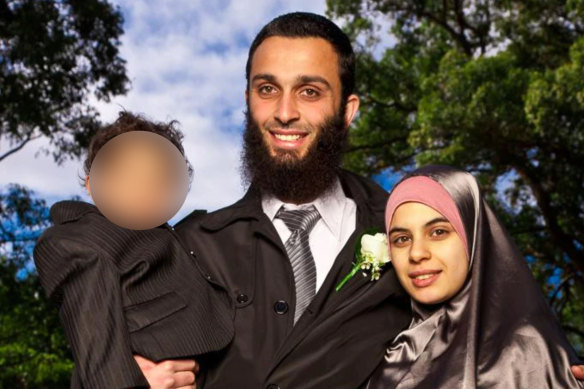 Mariam Raad with her former husband Muhammad Zahab, who is reported to have been killed in 2018.

Raad, 31, was charged on Thursday with entering and remaining in the “declared zone” of al-Raqqa province in Syria, which was an IS stronghold in 2014.

Police said new evidence had come to light that Raad was aware of the activities of her then-husband Muhammad Zahab, though Raad has previously said she knew nothing of Zahab’s role with Islamic State.

Zahab, a former Sydney maths teacher, was the most senior Australian member of IS and was thought to have enticed at least a dozen other Australians to join him in Syria. He was reportedly killed by an airstrike in 2018.

“It will be alleged in court that the woman, who is now living in Young, travelled to Syria in early 2014 to join her husband, who left Australia in 2013 and joined Islamic State,” the Australian Federal Police and NSW Police said in a joint statement. 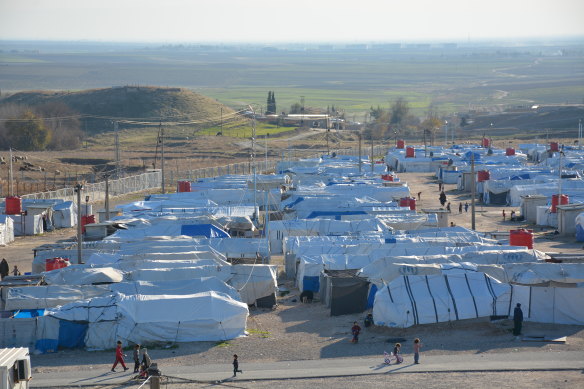 Dozens of Australians were stuck at al-Roj refugee camp in northern Syria.

“It will also be alleged the woman was aware of her husband’s activities with Islamic State, and willingly travelled to the conflict region.”

It is an offence under Commonwealth law to enter and remain in areas where the government has declared “a listed terrorist organisation is engaging in a hostile activity”. It carries a penalty of up to 10 years in jail.

Raad was returned to Australia in October along with three other Australian women and 13 children who had been living in squalid conditions in the Al-Roj Internally Displaced Persons camp in north-east Syria.

The decision to bring the families of former IS fighters home was criticised at the time by the federal Opposition Leader Peter Dutton, who had previously resisted calls to repatriate them. Eight children and grandchildren of two dead IS fighters were brought home under the former government in 2019.

“I made a decision based on the intelligence that I received at the time: these women shouldn’t come back to Australia,” Dutton said in October, adding the decision was based on advice from the Australian Security Intelligence Organisation, the federal police and defence force.

When the women and children were brought home, Home Affairs Minister Clare O’Neil said that decision was also informed by national security advice and the government had considered a range of security, community and welfare factors.

After Raad’s arrest on Thursday, a spokeswoman for Attorney-General Mark Dreyfus said: “This arrest is the result of an ongoing Joint Counter Terrorism Teams investigation and concerns alleged conduct that occurred outside of Australia in 2014. Since her return, there has not been any threat to the Australian community.”

On their return, the so-called “ISIS brides” released a joint statement, apologising “for the trouble and hurt we have caused … We are willing to do whatever is asked of us by government authorities to ensure the safety of our families and the Australian community and we will fully co-operate with all Australian law enforcement agencies.”

Raad told the ABC in 2018 she knew nothing about Zahab’s role with Islamic State.

“We’re, like, now emotionless. I would say probably I was angry [at him],” she said while in the al-Roj camp.

“Individuals will be brought before the courts when evidence supports allegations that returned individuals have committed offences in conflict areas,” Booth said in a statement.

“The JCTT will continue to target criminal activity and does not target specific ideologies or beliefs.”

The Save the Children organisation, which has been campaigning for families to be repatriated, said: “Australia has a clear moral obligation and international legal requirement to repatriate its citizens from camps in north-east Syria, just as nations including the United States, Germany and France have done.

“Australia is showing that it is possible to repatriate its citizens while balancing any potential risks and ensuring the safety of the wider community.”

About 40 Australian women and children remain in displaced persons camps in Syria.