Wellington: New modelling prepared for the Ardern government by Shaun Hendy suggests that New Zealand could see up to 7000 COVID-19 deaths a year even with a high proportion of the population jabbed.

The modelling from Te Punaha Matatini – the New Zealand Centre of Research Excellence for Complex Systems – suggests that if 80 per cent of the population aged 5+ was fully vaccinated, around 75 per cent of the entire country, COVID-19 would still cause a serious death toll without other restrictions. 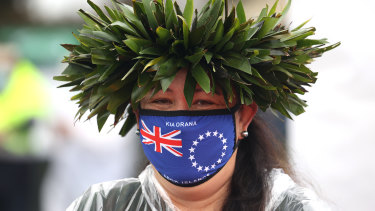 A volunteer at a drive-through vaccination drive for Cook Islanders in Auckland, New Zealand, on Thursday.Credit:Getty Images

Hendy projects it would cause 60,000 hospitalisations and 7000 deaths over a one-year period.

This would make ending restrictions very difficult without very-high vaccination rates, should the Delta outbreak not be stamped out in Auckland. Auckland is currently under level-three restrictions, while the rest of the country is on level two.

“The modelling results show the importance of New Zealanders achieving the highest vaccination coverage we possibly can,” said the centre’s Dr Rachelle Binny.

“The alternative is bleak. Failing to reach these high levels of vaccination would mean we will need to keep relying on lockdowns and tight border restrictions to avoid thousands of fatalities. This could cripple our healthcare system, and Māori and Pacific communities would bear the brunt of this health burden.” 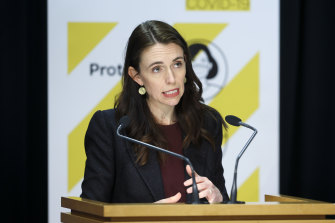 Prime Minister Jacinda Ardern said the modelling showed a high vaccination rate would be key to getting rid of lockdowns.

“The more people are vaccinated the fewer restrictions we will need to live with,” Ardern said.

Just a third (33 per cent) of the country has been fully vaccinated, but 62 per cent have had a first dose, according to official data.

She said the government wanted to move away from lockdowns. They were used previously because there wasn’t “individual armour”, or vaccines.

Ardern sees the numbers in the modelling as a cause for hope.

“It shows we can have a model that couples vaccinations with public health measures to prevent high death rates and hospitalisations. She said she has modelling that was “much much worse” than this at the beginning of the pandemic.

Many other nations have found it hard to vaccinate more than 70 per cent of their population.

The United Kingdom, Germany, Japan, Israel, and the United States all have vaccination first-dose vaccination rates between 60 and 70 per cent.

Just getting to 75 per cent of the full population vaccinated would require vaccinating around 88 per cent of those aged 12 or over.

Officials reported 15 new cases in New Zealand on Thursday, all in Auckland.