Heroin addict prisoners may have to quit cold turkey rather than being weaned off the drug using methadone, under proposals from the Justice Secretary.

Dominic Raab is next week expected to set out that convicts will have to take an abstinence-based approach over worries that current treatment leaves them reliant on methadone.

As it stands, people addicted to heroin or other opiods can be given a substitute drug, such as methadone — which experts say is less deadly than heroin — to limit withdrawal side effects.

Mr Raab believes the approach has left too many prisoners taking methadone to avoid them causing harm to themselves, other prisoners and guards, rather than trying to get them clean, according to the Telegraph.

The move comes after the Justice Data Lab found female inmates following abstinence programmes were 40 per cent less likely to reoffend compared to those following other treatments for drug addiction.

But it may be faced with resistance, as some experts warn methadone is an effective treatment.

Drug addiction in prison has been on the rise, with the think tank Reform estimating one in seven prisoners are addicts — rising from six per cent in 2014 to 15 per cent in 2019. 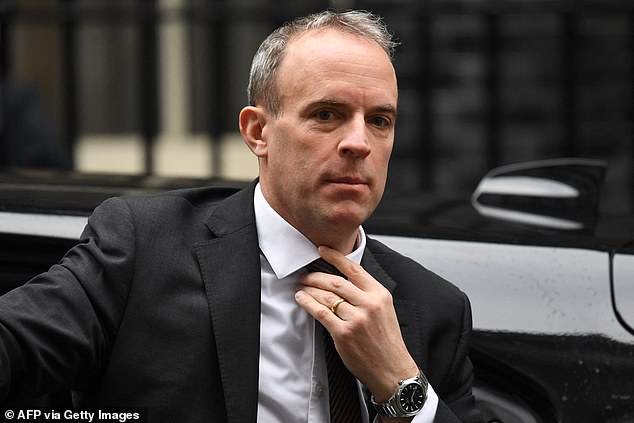 Speaking to the Commons Justice Committee this week, where he hinted at the plans, Mr Raab said: ‘Too many offenders are placed on methadone and other opiate substitutes because it puts prevention of harm… to individual offenders, other offenders and prison officers at the forefront.

‘That might be fine temporarily but methadone is harder to get off than heroin. It is more addictive than heroin.

‘You have to ask yourself if they are staying on it indefinitely, how much is that driving towards recovery.’

He added: ‘We want to get a better balance,’ he said, which would include early assessment, treatments with a ‘much stronger focus on eventual recovery and therefore ending the addiction dependency rather than replacing it’.

Julie Muir, executive director of recovery at the Forward Trust, a charity that helps addicts, told the newspaper abstinence-based programmes are followed inside and outside of prisons.

She said: ‘Addiction is a serious mental illness and not a choice. It has a devastating impact on people’s lives.

‘As a society we need to do more to ensure everyone has the opportunity of recovery, no matter who they are.’

Niamh Eastwood, executive director of Release, a centre for drug expertise, said abstinence had a role, but warned against downplaying the value of methadone which had been shown by multiple studies to be an effective medical treatment.

‘Methadone demonstrably saves thousands of people’s lives. This kind of rhetoric does nothing to help reduce the number of deaths and could contribute to a higher rate of deaths as community services take it as a signal from Government that methadone should not be supported,’ she said.