A ‘terrifying’ stalker who left his victim too scared to leave her home after he drove past it up to 15 times per day – forcing her to wear a bodycam for her own protection – has avoided jail.

‘Obsessed’ Anthony Laslett, 28, showed a ‘complete lack of empathy’ as he followed Anabell Holland around in his van and repeatedly smirked at her, Canterbury Crown Court heard.

Mr Laslett followed his victim around in a van – terrifying her so much that she resorted to using a body-worn camera for protection.

Miss Holland’s ordeal began when she rejected the stalker’s attempts to strike up a romance, with the 28-year-old then pestering her. 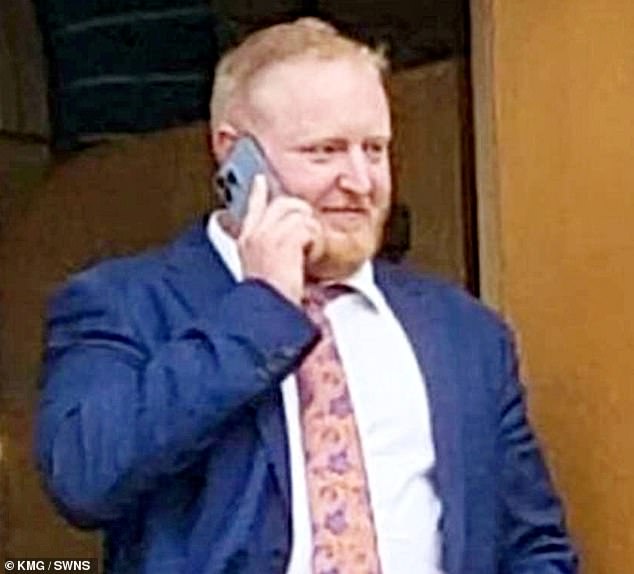 The victim was left terrified after Mr Laslett smirked at her from the same vehicle three times on a day in January this year, prosecutors said

Moments before, the stalker could be seen weeping in the dock, while promising a judge he would leave Miss Holland alone, or face prison.

The court heard Miss Holland was forced to secure a temporary stalking order against Mr Laslett last year, in a bid to shut down his advances.

But while pining for attention, Mr Laslett trampled over the court ruling by following her on TikTok, days before Christmas.

He then used his Vauxhall to swoop near her Margate home 15 times in one day, despite being fitted with a tracker system to help authorities trace his movements.

And she was left terrified after Mr Laslett smirked at her from the same vehicle three times on a day in January this year, prosecutors said.

The 28-year-old stalker breached the order a final time by entering Bugsy’s Tenpin Bowling in Ethelbert Crescent in June, and was arrested shortly afterwards.

Miss Holland, who attended the hearing remotely, told the court in a statement: ‘I’m in pure fear of Anthony Laslett. He makes me so scared that I don’t want to go out.

‘I don’t go out. I spend most of my time at home apart from seeing my mother.

‘It has got to that point now where I would rather video-call people than go out because I’m scared.’

Miss Holland added she walks outside with a video camera in case he is following her, and feels ‘jumpy and paranoid’.

She added: ‘During this last year and a half, dealing with a stalker has really affected my life and the things I do.’

Laslett originally denied the crimes in a police interview but admitted four stalking offences before a trial.

Kerry Waitt, mitigating, said Laslett ‘accepts there is no future in a relationship’ with Miss Holland and assures he ‘will not be pestering her in the future’.

‘It is clear there has been difficulty with Mr Laslett accepting and understanding the impact of his behaviour.

‘I would suggest the defendant’s behaviour, his fixation, his failure to realise the consequences is, in part, attributable to his underlying mental health issues, in particular his autism.’

It would provide more help to protect Miss Holland and anyone else he fixates on, while increasing the chance of rehabilitation.

She told Laslett his ‘terrifying’ behaviour showed a ‘complete lack of empathy’ as he ‘altered [Miss Holland’s] life in significant ways’.

‘You had never been more than friends, you wanted more, she did not, and you did not accept that and it is clear you became obsessed.’