Kyiv: Ukrainian President Volodymyr Zelensky declared his country a “global leader” in a speech to parliament, telling lawmakers to remain united in the face of Russia’s invasion and praising Ukrainians for helping the West “find itself again”.

Zelensky, in an annual speech on Wednesday held behind closed doors because of Russia’s war, said Ukraine’s military resistance against the Kremlin had reinvigorated a belief in values across the world. 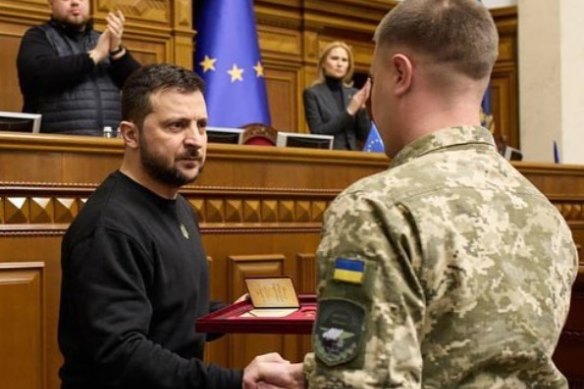 “Thanks to our unity we achieved that which almost no one in the world believed. Almost no one — except us,” he told lawmakers, his cabinet, other senior officials and the top military brass.

“Our national colours are today an international symbol of courage and indomitability of the whole world,” he said in the 45-minute speech.

The 44-year-old held forth with his distinctive rasping voice from the pulpit of the parliament, called the Verhovna Rada, wearing a casual black sweatshirt as lawmakers occasionally applauded.

The end-of-year speech was heavily focused on the war, now in its 11th month, but he also used it to outline ideas – such as decentralising the energy system and making it greener – to rebuild a robust and prosperous state.

Thanking Western partners for weapons supplies, Zelensky also said Ukraine would spawn a powerful homegrown defence industry that “will be one of the most powerful in Europe and the world”.

He added that Ukraine would increase the number of Starlink internet service terminals in its posession to more than 30,000. The SpaceX units have been vital to maintaining internet access in places badly hit by Russian air strikes.

Zelensky also told parliament that Ukraine had secured the release of 1,456 prisoners of war since Russia invaded, the result of a series of prisoner exchanges with Moscow.

Russia is thought to hold thousands of Ukrainian prisoners of war, but the exact figures are not known. 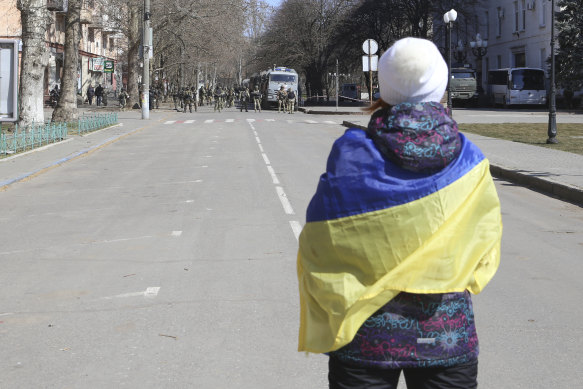 A woman covered by Ukrainian flag stands in front of Russian troops in a street during a rally against Russian occupation in Kherson, Ukraine in March.Credit:AP

The Kremlin’s troops invaded Ukraine on Feb. 24, launching a war that has killed tens of thousands, destroyed cities and displaced millions.

“Ukraine became one of the global leaders,” he said.

“Over 10 months of this year, we helped everyone. We helped the West find itself again, to return to the global arena and feel how much the West prevails. No one in the West fears nor will they fear Russia,” Zelensky added.