Where’s Wally now? Euro-tripping Walrus quits UK after six weeks in the Isles of Scilly and heads for Ireland on the latest stop on his summer tour – as experts hope he may be heading back to the Arctic

Wally the Walrus has finally left the UK and swum towards Ireland – with experts claiming he may be heading back to the Arctic.

The lonely walrus has been on a 4,000km solo trip for months and spent more than six weeks off the Cornish coast.

The walrus is believed to be from Svalbard, north of Norway, and to have travelled by himself between Wales, Cornwall and France.

The walrus had been in the Isles of Scilly since June 17 and proved a popular hit with tourists and locals.

But now Wally has left St Mary’s – and locals think he’s heading back to Ireland where he was first noticed.

Isles of Scilly resident and wildlife enthusiast Scott Reid tweeted: ‘Wally has finally left us! He brought so much joy to the islands during his prolonged visit, he’ll be missed! Enjoy your stay in Ireland big fella. Safe travel.’ 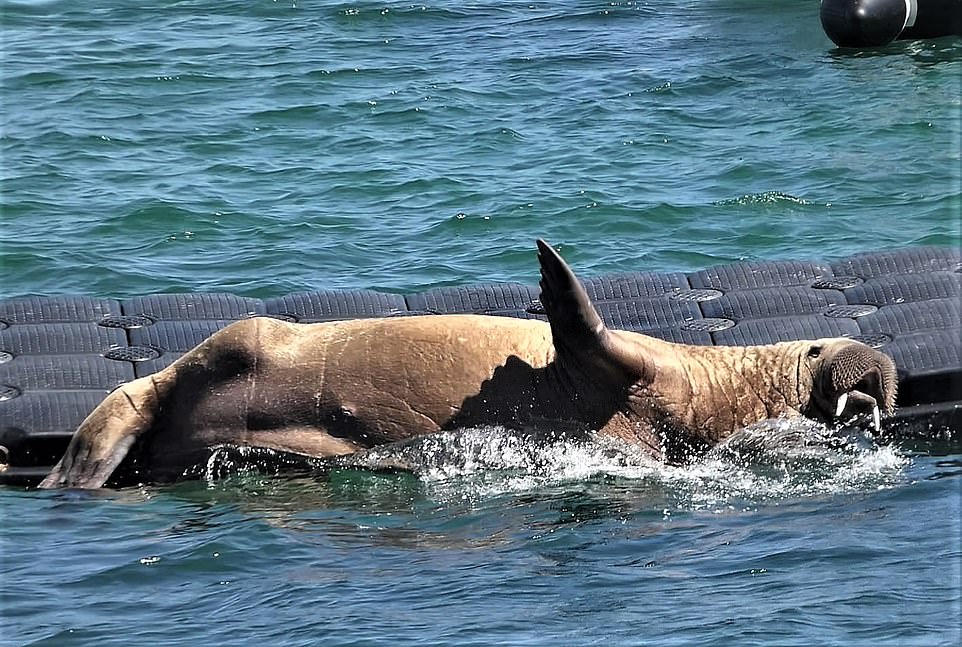 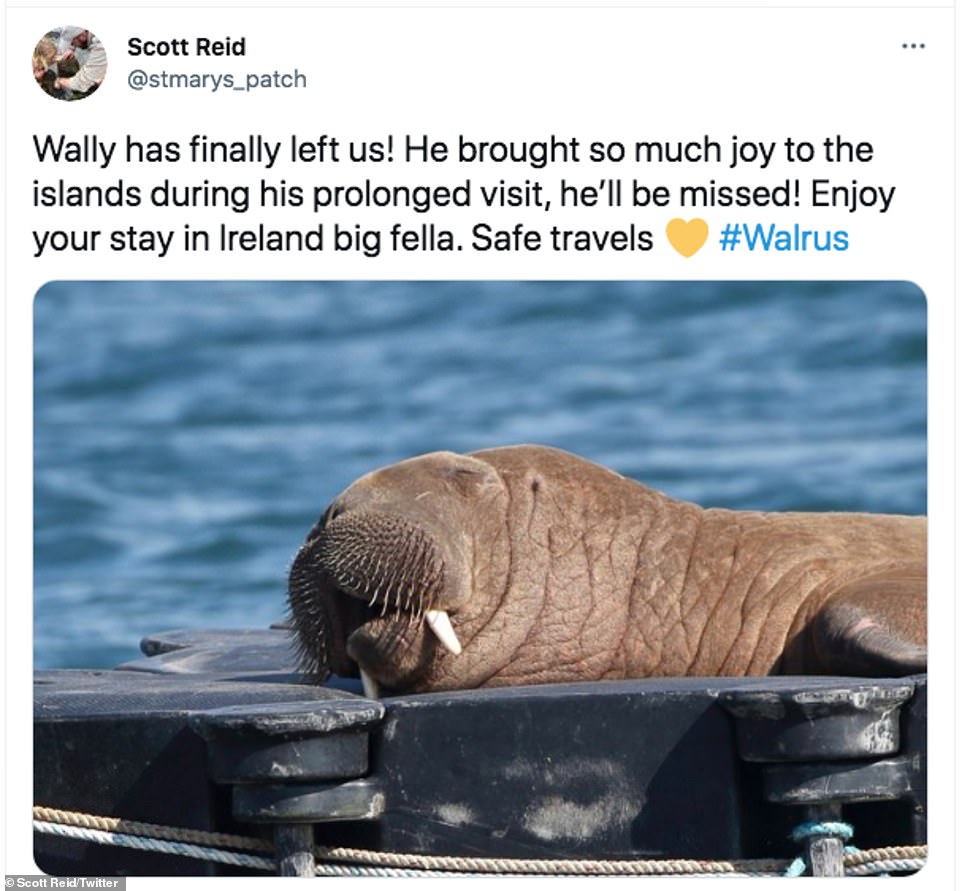 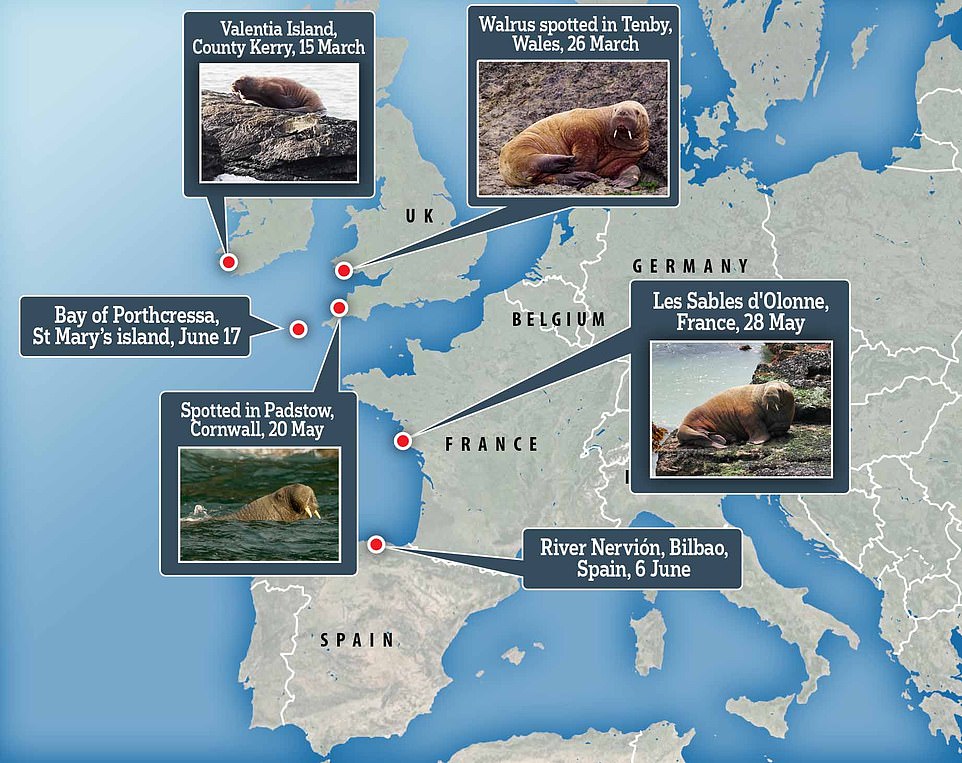 Animal welfare groups believe it initially came across the North Atlantic ocean from Greenland on an ice floe.

It was first seen in Ireland before taking up residence in Tenby, Pembrokeshire in March.

Posting on Facebook, Seal Rescue Ireland said: ‘The Walrus is back in Irish waters!

‘The young, male Atlantic Walrus, who was originally sighted on Valentia Island, Co. Kerry, last March, has returned to Irish waters after completing the European leg of his tour.

‘We ask if anyone encounters the Walrus to please:

‘1) Do not approach him as he is a protected species. Observe quietly from a minimum of 300m and keep dogs on a lead. 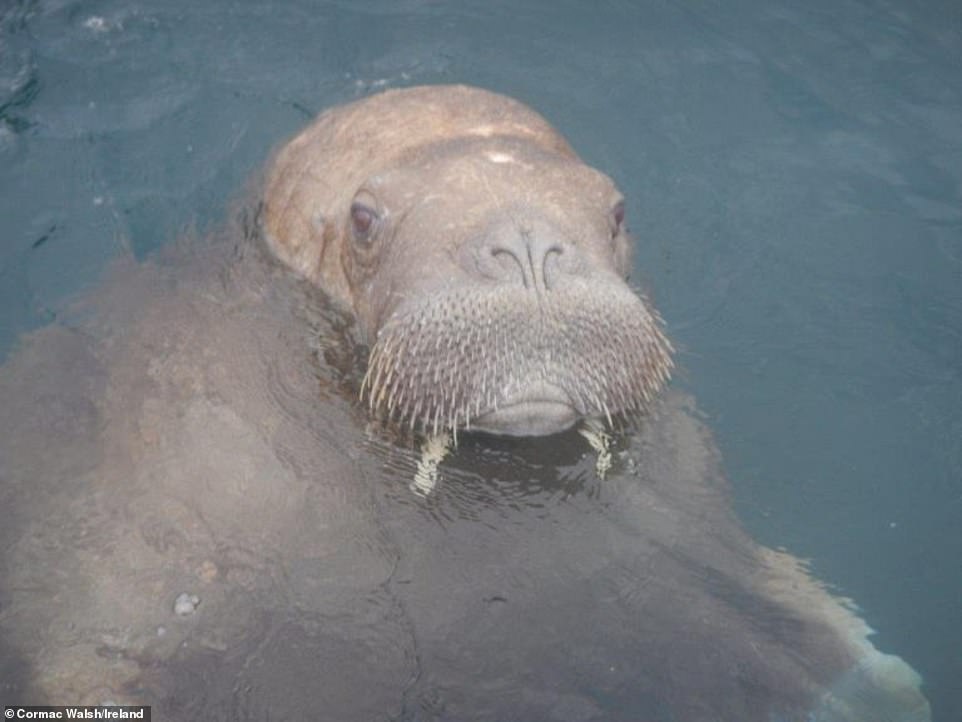 Wally the Walrus is swimming back north after abandoning his temporary home on the Isles of Scilly, experts have said 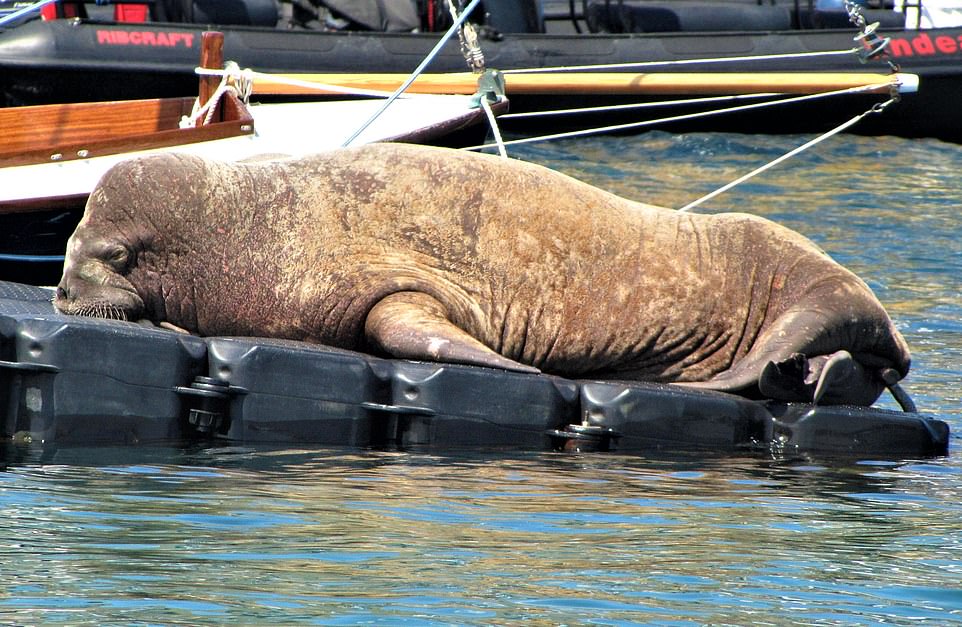 The seal trust had warned that if he is continually distracted, he will not gain the weight and energy for a long journey home 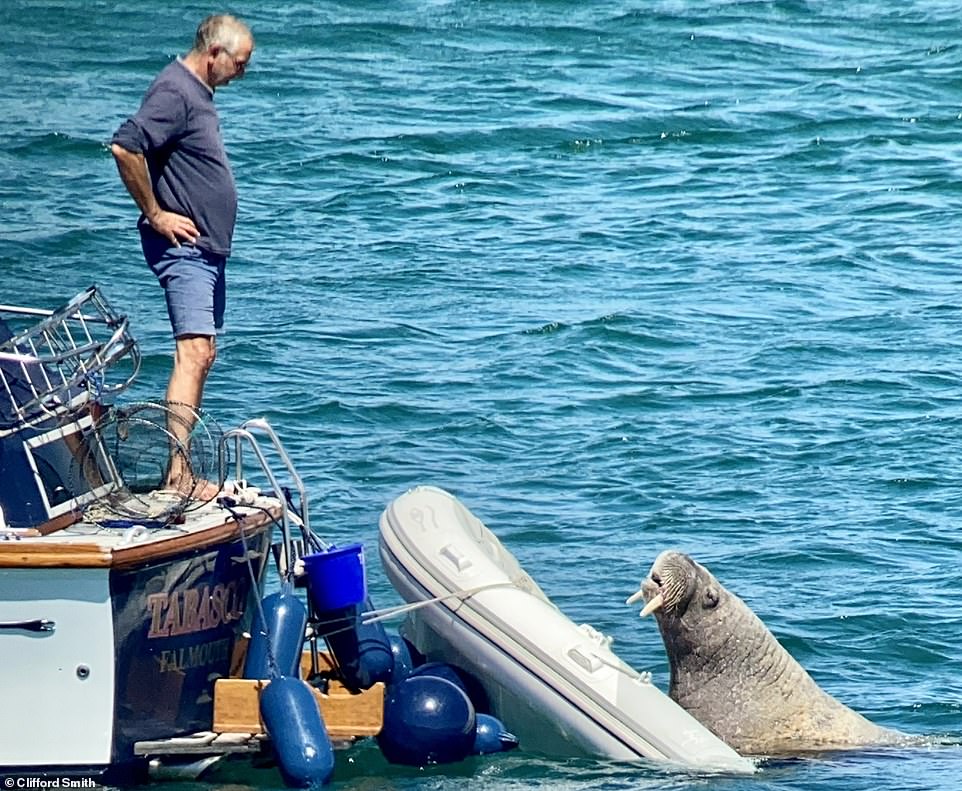 ‘2) Do not publicly disclose the location of the sighting to avoid attracting crowds to him. Remember that this is a very sensitive species, and he’s a very long way from his Arctic home.

‘3) Report sightings to SRI’s 24/7 Rescue Hotline on 0871955393. We are working with a number of wildlife organizations who have been monitoring his movements since he was first spotted last March, to minimize the risk of stress and injury and in hopes that he will make his way back to his native northern waters.

‘As sea ice melts due to climate change, Arctic species, such as walruses, are losing habitat and may be forced to explore new areas.

‘This isn’t the first Arctic visitor Ireland has received in recent years (like Cloudberry the Ringed Seal), and he likely won’t be the last.’ 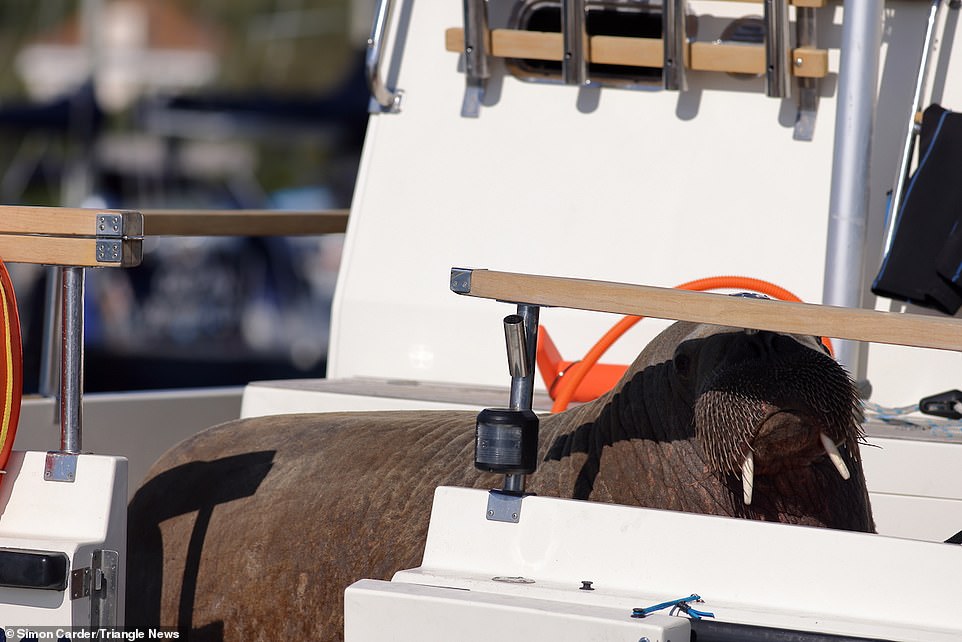 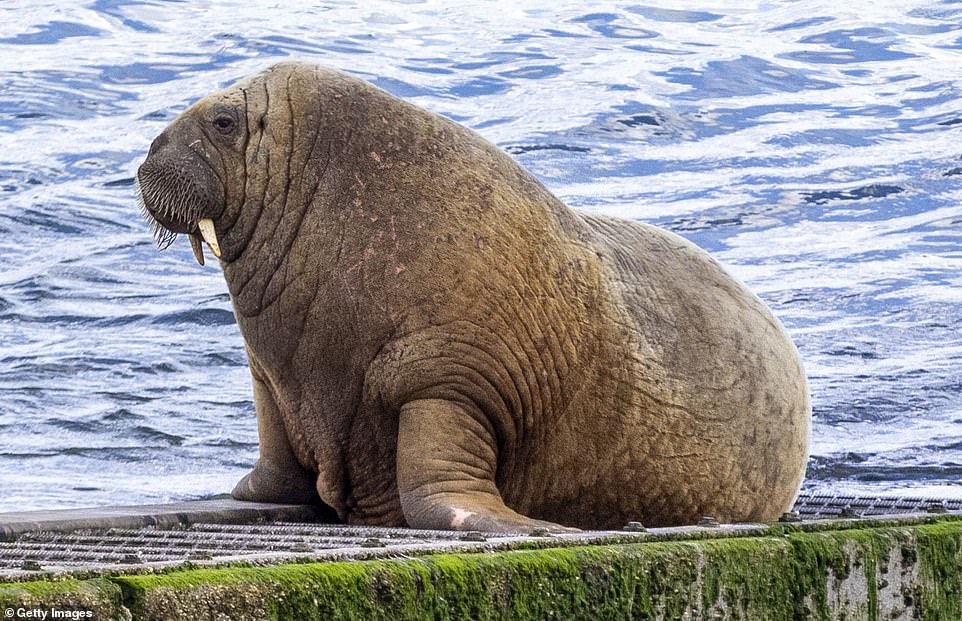 The walrus had got into hot water after he became accustomed to climbing on dinghies in the area and damaging boats in St Mary’s Harbour.

A customised pontoon with his own scent was built for him so he could have a safe space to rest before he ws able to travel again.

Dan Jarvis from British Divers Marine Life Rescue (BDMLR), which has been monitoring the walrus, said a sighting was confirmed on Monday afternoon.

He told the BBC: ‘We are really pleased it has worked out for the best. The best news would be that he continues to travel north under his own steam. We’ll just have to wait and see.

‘He has been a very popular character while he’s been here but we’re all quite pleased that he’s moved on now because we were starting to worry how long this might carry on for. He has certainly been a highlight and something to remember.’

BDMLR said in a statement shared with their supporters: ‘We hope after having spent enough time recuperating after his jaunt from South Wales to Scilly via Spain, that this is a good sign he now has the energy to power himself back to the Arctic.

‘We will of course continue to keep an eye on his travels and assist our colleagues should any help and advice be needed.’