Germany’s outgoing Chancellor Angela Merkel received a warm welcome in Israel as she paid a final official visit to its national Holocaust memorial.

Mrs Merkel made a stop at the memorial, Yad Vashem, today (Sunday) where she laid a wreath in memory of the six million European Jews killed by the Nazis during the Second World War.

‘Every visit to Yad Vashem touches me at the core,’ Mrs Merkel said. 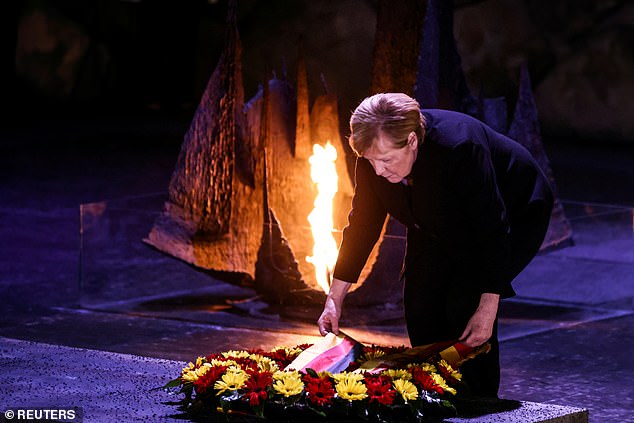 ‘The crimes against the Jewish people that are documented here are a perpetual reminder of the responsibility we Germans bear and a warning,’ she added, saying it was Germany’s responsibility to stand up against anti-Semitism.

But differences emerged between the close allies on the key issues of Iran’s nuclear programme and the establishment of a Palestinian state. 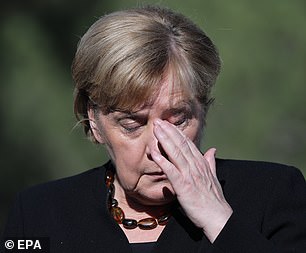 She also said that Germany believed that a two-state solution remained the best way to end Israel’s decades-long conflict with the Palestinians.

‘I think that on this point, even if at this stage it seems almost hopeless, the idea of a two-state solution should not be taken off the table, it should not be buried … and that the Palestinians should be able to live securely in a state,’ Mrs Merkel said at a joint news conference with Prime Minister Naftali Bennett.

She also said that Israeli settlement construction on occupied territories sought by the Palestinians was unhelpful.

Mr Bennett, a former settler leader who opposes the establishment of a Palestinian state, quickly pushed back.

‘Based on our experience, the meaning of a Palestinian state means that very likely there will be established a terror state, roughly seven minutes from my house and from almost any point in Israel,’ he said.

Calling himself a ‘pragmatic man’, he instead said he was prepared to take steps on the ground to improve living conditions for Palestinians in the West Bank and Gaza Strip.

‘The worst form of terrorism is the occupation, not the establishment of a Palestinian state,’ he wrote on Twitter.

It was one of the few disagreements between the close allies during Mrs Merkel’s two-day visit, which caps a 16-year term marked by near unwavering support for Israel. 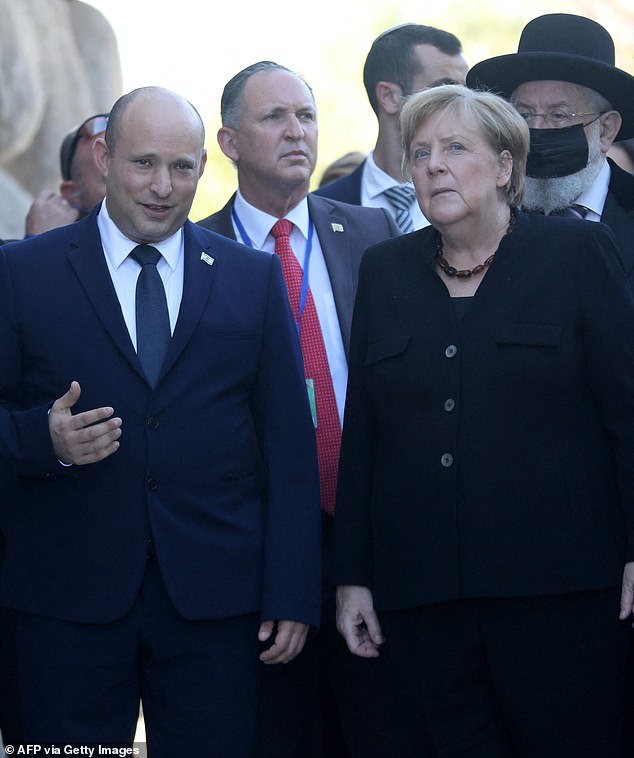 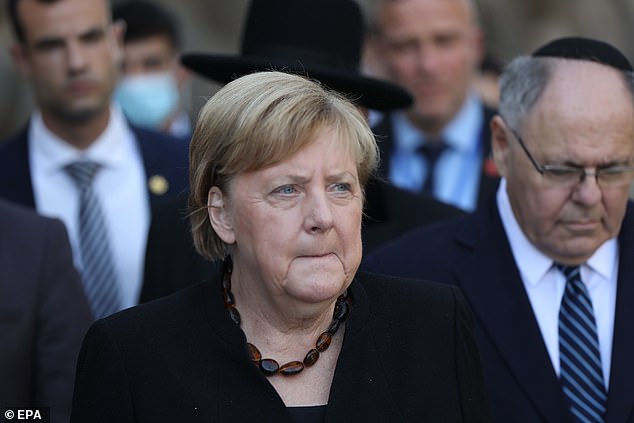 At every stop, she was welcomed as a ‘true friend’ of Israel.

She repeatedly professed Germany’s commitment to Israel’s security and said she was confident that Germany’s next government – to be determined in lengthy coalition talks following an inconclusive election last month – would take a similar stance.

‘I am optimistic that every German government, including the one that follows mine, will feel committed to Israel’s security, and I think any successor who becomes German Chancellor will see it that way,’ she said.

Much of the agenda was expected to focus on Iran’s nuclear programme. While the two leaders both vowed to prevent Iran from developing a nuclear weapon, they voiced different approaches about how to do that.

Germany was a leading player in the 2015 international nuclear deal with Iran. The deal fell apart after former US president Donald Trump, with Israel’s support, withdrew from the agreement in 2018. The Biden administration has been trying to revive that deal – known as the JCPOA – over Israeli objections. 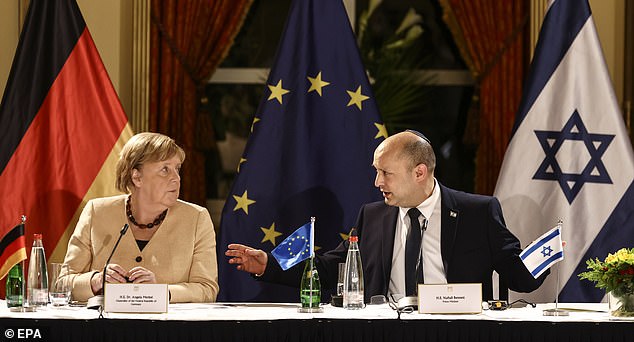 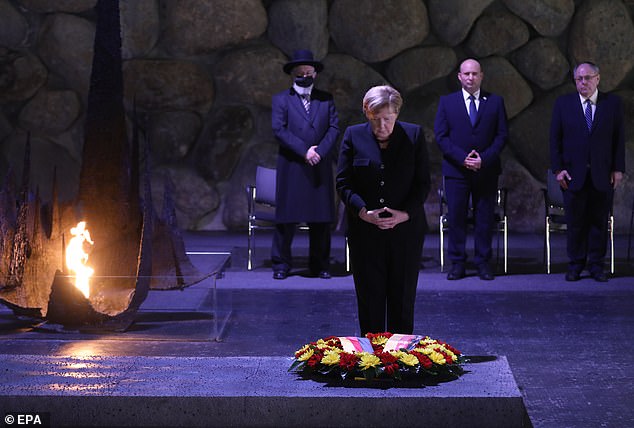 ‘The crimes against the Jewish people that are documented here are a perpetual reminder of the responsibility we Germans bear and a warning,’ Mrs Merkel said

‘I never considered the JCPOA to be ideal, but it’s better than having no agreement,’ Mrs Merkel said.

She said the situation was ‘very difficult’ as Iran continued to enrich uranium.

‘We are facing critical weeks around this question,’ she said.

Israel considers Iran its greatest enemy, citing the country’s military presence in neighbouring Syria and its support for hostile militant groups across the region.

It accuses Iran of trying to develop nuclear weapons – a charge Iran denies – and says a nuclear-armed Iran would pose an existential threat to Israel.

‘There is no point in trying to appease the Iranians. They interpret conciliation as a weakness,’ Mr Bennett said, accusing Iran of trying to delay while it moved forward with its weapons efforts.

‘This is a critical point in time, and Germany’s position is particularly important.’

Israel was formed in the wake of the Holocaust in 1948 and the two countries only established diplomatic ties in 1965. But over the decades those ties have warmed.

Germany is Israel’s largest trading partner in Europe and the German government has provided solid support to Israel during wars and diplomatic crises.

Mrs Merkel was scheduled to visit in August, but the trip was postponed after the crisis in Afghanistan in which the Taliban seized power.

She then delayed the visit until after last month’s German election. She now remains in office in a caretaker capacity until a new government is formed, a process that could take weeks or even months.

The 1943 Warsaw Ghetto uprising: ‘One of the most significant occurrences in the history of the Jewish people’

The 1943 Warsaw Ghetto uprising is seen as the most significant – although ultimately doomed – act of Jewish resistance against Nazi Germany during the Holocaust.

According to the United States Holocaust Memorial Museum, the uprising was ‘one of the most significant occurrences in the history of the Jewish people.’

The Nazi’s ‘Grossaktion Warsaw’ operation in the summer of 1942 saw more than a quarter of a million Jewish people deported from the Warsaw ghetto to Majdanek and Treblinka, two Nazi death camps in Poland, where they were murdered.

Remaining Jews began to smuggle weapons and explosives into the Warsaw ghetto, and the left-wing Jewish Combat Organization (ŻOB) and right-wing Jewish Military Union (ŻZW) formed and began to train. 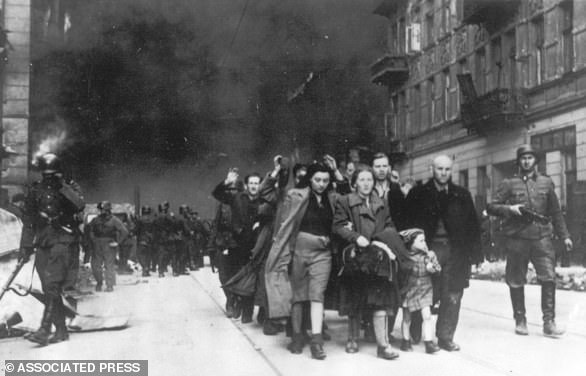 In this 1943 file photo, a group of Polish Jews are led away for deportation by German SS soldiers, in April/May 1943, during the destruction of the Warsaw Ghetto by German troops after an uprising in the Jewish quarter

Another small resistance to a Nazi roundup in January 1943 was partially successful, and some Polish resistance groups were encouraged to support their fellow Jewish citizens.

The Warsaw Ghetto uprising started on April 19, 1943 when the ghetto refused to surrender to the police commander SS-Brigadeführer Jürgen Stroop, who ordered the burning of the ghetto, block-by-block.

By the time this ended on May 16, 13,000 Jews had been killed, about half of them burnt alive or suffocated. Fewer than 150 Germans are estimated to have been killed.

It was the largest single revolt by Jews during World War II, and the Jews involved knew it would likely end in their deaths. Marek Edelman, the only surviving ŻOB commander, said that their reasoning behind the attempted uprising was ‘to pick the time and place of our deaths’.

After the war, Jürgen Stroop was extradited from Poland and was tried, convicted, and executed for crimes against humanity. Stroop was hanged at Mokotów Prison at 7 p.m. on March 6, 1952.