The growing number of people testing positive for Covid after coming into hospital for another illness is a ‘major problem’, an intensive care doctor in Omicron hotspot London admitted today.

There is growing pressure from experts and politicians to distinguish between admissions from Covid and patients with the virus after MailOnline yesterday revealed up to two-thirds of new coronavirus patients are not being treated by the NHS because of the disease.

Cambridge epidemiologist Dr Raghib Ali said that this distinction is vital before ministers can make any decision on further lockdown curbs because it will show how much pressure the NHS is actually under.

In the two weeks to December 21, hospitals in England recorded 563 new coronavirus inpatients — the majority of which are believed to be Omicron now that the variant is the country’s dominant stain.

But just 197 (35 per cent) were being primarily treated for Covid, with the remaining 366 (65 per cent) only testing positive after being admitted for something else.

Dr Zudin Puthucheary, a member of the Intensive Care Society and physician in London, said the number of patients coming into hospital who ‘happen to be Covid positive’ is skewing the statistics.

And he added the figures are further boosted by the number of people catching the virus on wards — with separate data showing 31 per cent of patients test positive seven days after treatment for other illnesses.

Ministers are keeping a close eye on hospitalisation statistics in the capital, with lockdown restrictions expected to be brought down if admissions exceed 400 a day.

The figure is considered to be the breaking point of the NHS — despite daily admissions reaching 977 in January during the height of the last winter wave of the pandemic. The latest data show hospitalisations are currently just shy of the threshold, with 301 Covid patients admitted on Monday.

MailOnline’s analysis suggests just over four in 10 new Omicron hospital patients in London were admitted for a different reason. 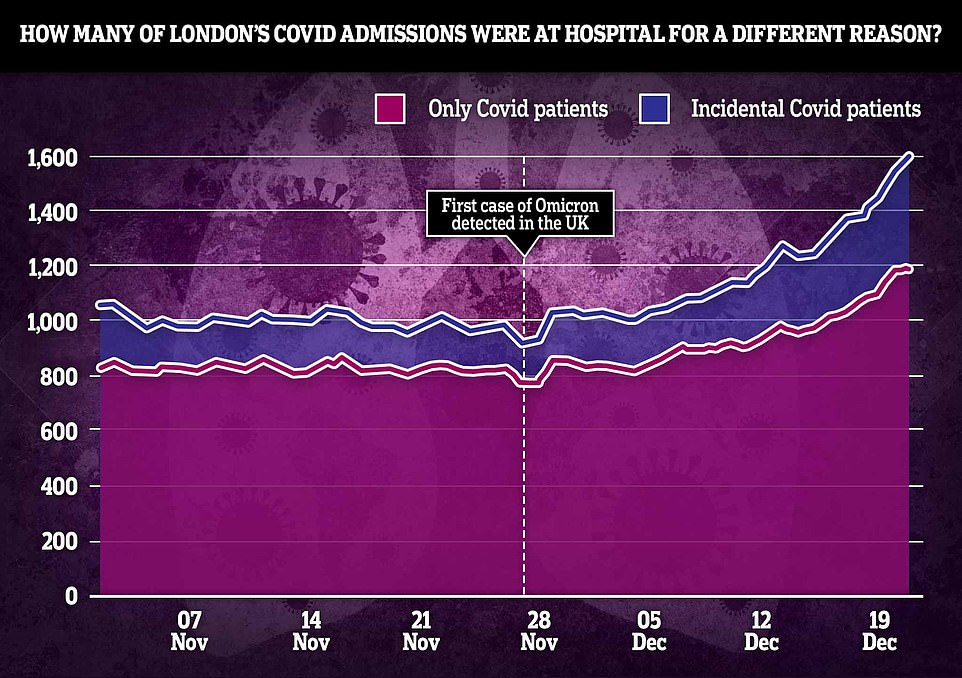 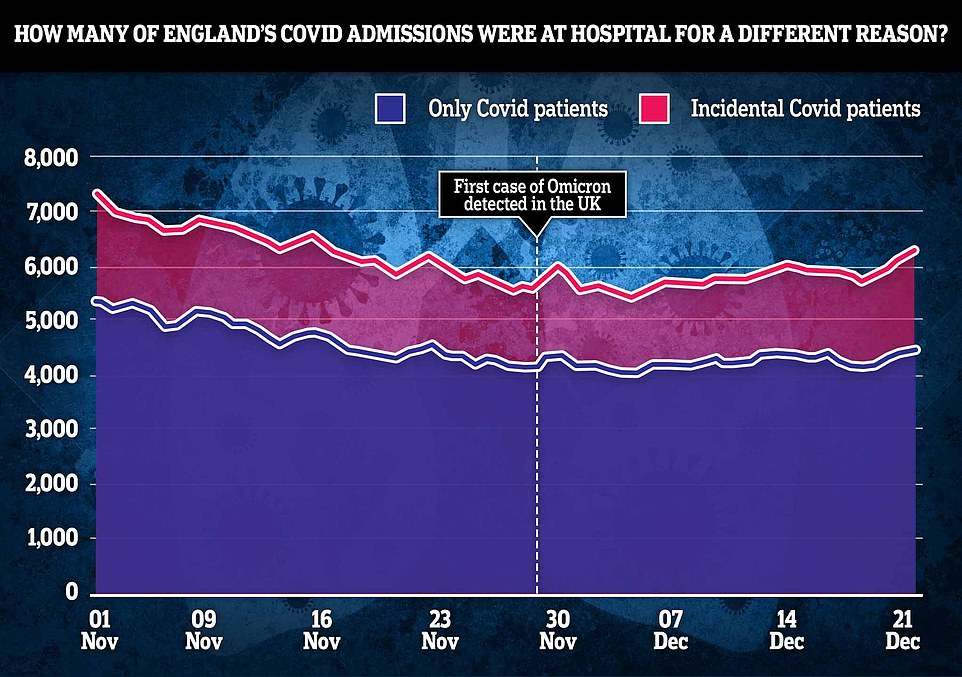 The number of Covid patients in hospital being treated primarily for Covid is actually lower than before Omicron. So called ‘incidental’ Covid admissions, where someone tests positive after arriving in hospital for a different reason, have risen sharply in the past few weeks and now account for the majority of new hospital admissions 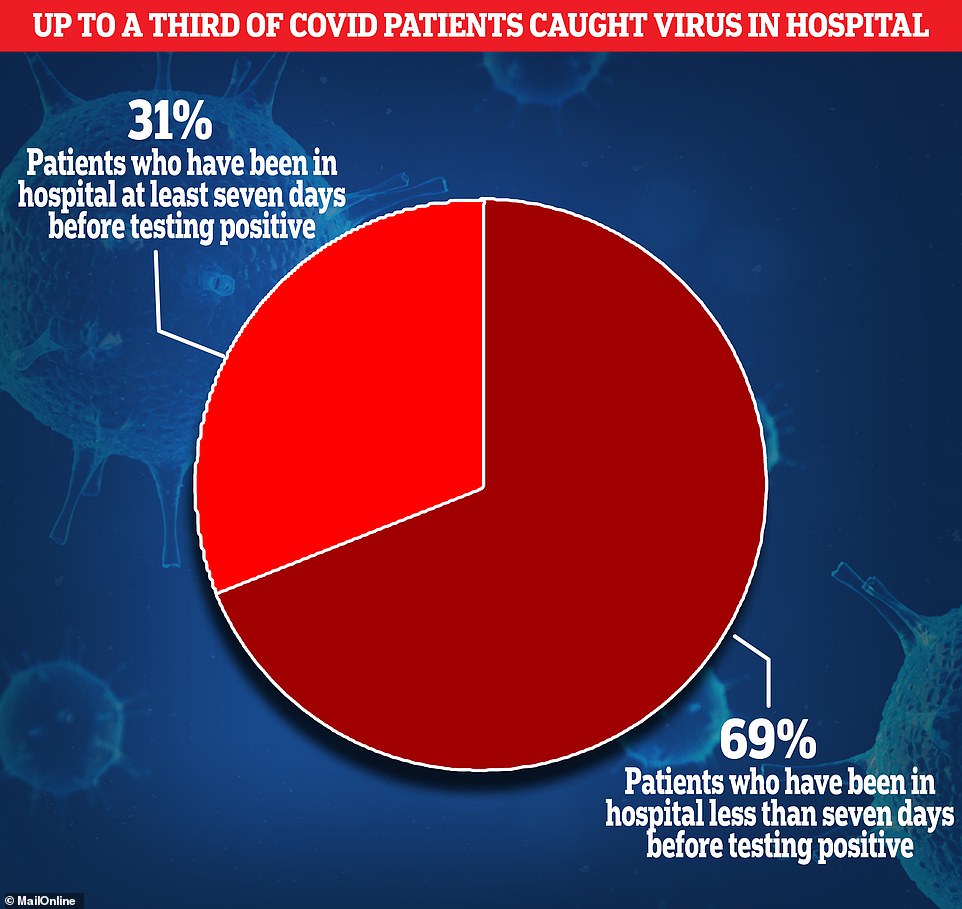 New Year celebrations could be axed to stave off staff shortages and protect the vulnerable even if hospitalisations stay low, a health chief warned today.

Jenny Harries, head of the UK Health Security Agency, said the ‘impact on society’ of Omicron will be crucial despite mounting evidence that it is generally milder than the Delta strain.

Dr Harries pointed to the ‘very high’ levels of absence among workers, with an extraordinary one in 35 having contracted the variant in London.

And she cautioned that it is still not clear whether the new version of the disease will be milder for older people, or how long people who do have to go to hospital will need to stay.

Asked whether ministers will be able to make a decision on Monday about whether restrictions will be needed before December 31, Dr Harries told BBC Radio 4’s Today programme: ‘Ministers will look at all of the data that we have available – and that isn’t simply what the epidemiology is saying, it’s how it’s impacting society.

‘So, for example, we have very high rates of individuals off sick – we know that particularly in London, around one in 35 have currently got Omicron.

‘Now that’s having an impact on the workforce. So these are not simply about hospitalisation rates.’

The comments came as Boris Johnson released his Christmas message, warning that ‘Omicron is surging’ and the pandemic is far from over.

The PM hailed the way that people have been flocking to get boosters, suggesting they are honouring Jesus by getting jabbed ‘not just for themselves… but for friends and family and everyone we meet’.

‘That, after all, is the teaching of Jesus Christ, whose birth is at the heart of this enormous festival, that we should love our neighbours as we love ourselves,’ Mr Johnson said.

‘Anecdotally we call it Covid bystander problems, where you come in with say a major car crash — people drink and drive a lot over Christmas — and they happen to be Covid positive but no one notices this until it comes back.

‘This is a big problem because this is one of the things that slows down a lot of work in hospital.

‘It slows down a lot of the urgent surgery that is happening because of the precautions that have to happen. And this really affects our efficiency and how we can help people.’

And asked if the number of patients testing positive after arriving was skewing hospitalisation statistics, he said they were also boosted because of the number of people catching the virus on wards.

He said: ‘Yes and we saw a lot of this in the last two waves, where our so-called green and clean areas were rapidly infected with patients with Covid who brought it in but didn’t manifest anything.

‘There’s a worry about how transmissible this is — it’s far more transmissible than any variant than we’ve seen before, so the fact that we’re seeing milder disease isn’t necessarily a good thing from the NHS’s point of view.’

But he warned while ICU admissions are currently low for Covid patients, doctors are expecting numbers to pick up at the start of January once current high case numbers have had enough time to translate into severe disease.

Covid-infected people put strain on hospitals because they need to be isolated, and, depending on a variety of risk factors, for example if the patient is elderly and/or frail, Covid can exacerbate health problems and later become the primary reason they remain in hospital.

And NHS officials have increasingly warned the health service is coming under increasing pressure due to Omicron, despite there being fewer Covid patients in hospital now than at the start of November.

According to NHS England data, there were 6,245 Covid patients needing hospital care on December 21. On November 1, almost four weeks before the first Omicron cases was found in the UK, this figure was 7,301.

Dr Ali told MailOnline: ‘If you’ve got very high prevalence of Omicron in the community then there is a higher chance anyone who comes to hospital for any reason, even people with broken legs, will have Covid.

‘It’s just feature of having so much Omicron in the community. It is essential to distinguish between admissions that are primarily for Covid and those that are not.

‘It’s not only helpful but in many ways essential to know the primary diagnosis and to know how many daily admissions there are for every condition — that would give us an indication of the true pressure on the NHS.’

And Professor Sir David Spiegelhalter, an eminent statistician at Cambridge University, said: ‘It looks like there is an increasing number of people being admitted to hospital who turn out to have Covid, presumably the Omicron variant.

‘This is perhaps inevitable with a fast-spreading variant in which the majority do not experience symptoms. But it means there is an extra burden on the hospitals in caring for infected patients.’ 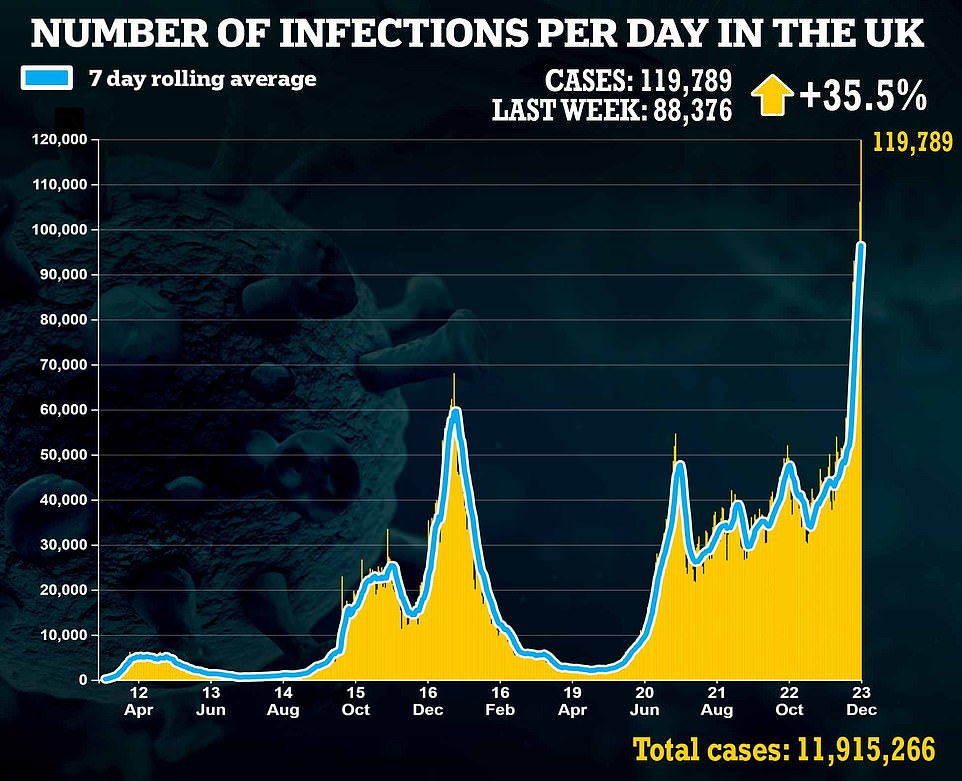 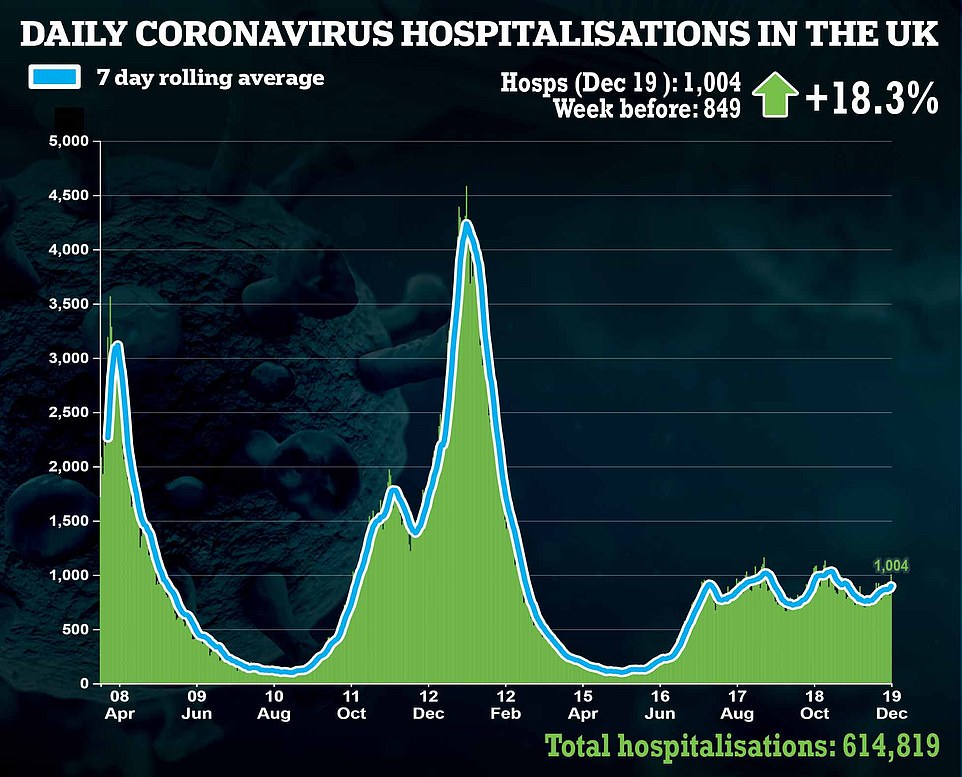 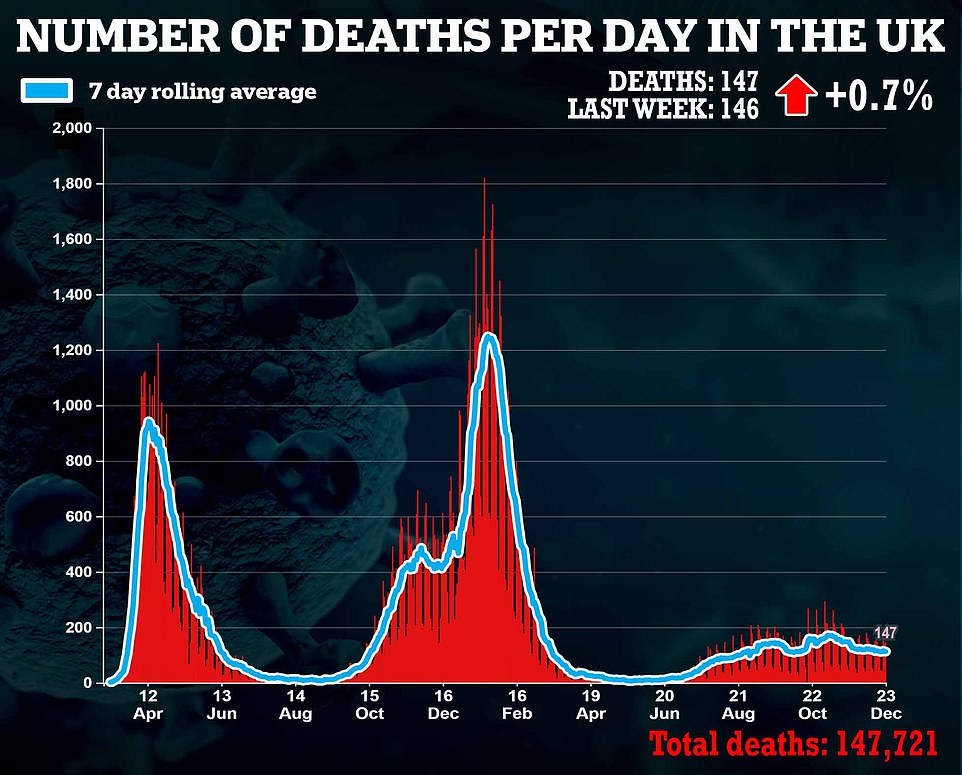 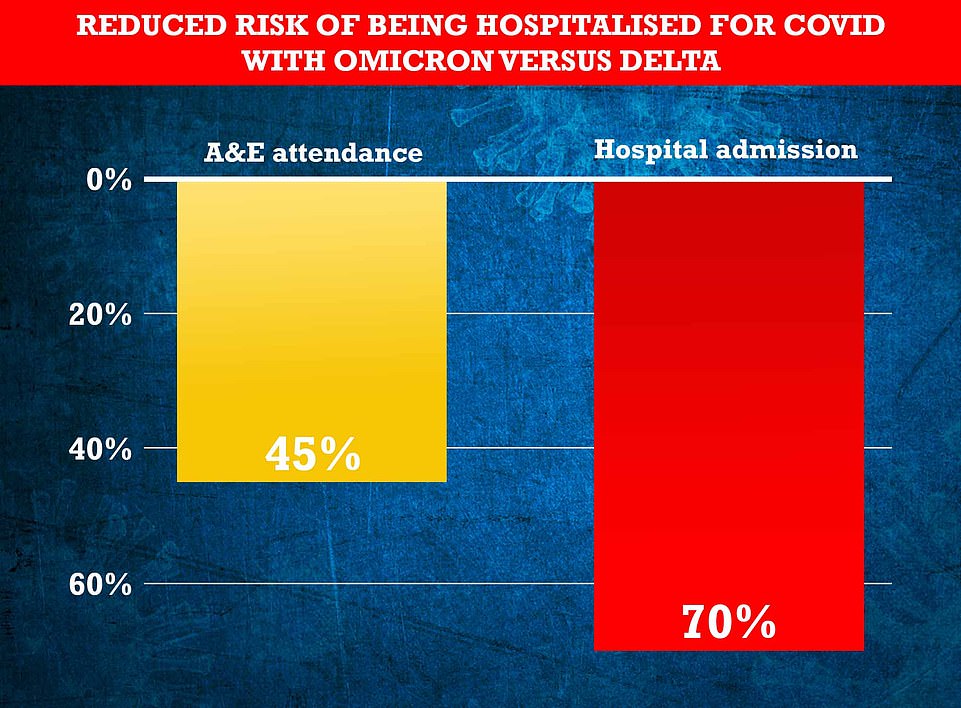 A fourth jab could now be rolled out early to millions of Britons after a new study showed protection against Omicron wanes within three months of a booster.

People infected with the contagious variant are up to 70 per cent less likely to end up in hospital, an official analysis of real-world cases has confirmed.

But the analysis from the UK Health Security Agency (UKHSA) also reveals that immunity from boosters fades more quickly against Omicron compared to Delta.

Those who received two AstraZeneca doses, plus a Pfizer or Moderna booster, have 60 per cent protection against Omicron for two to weeks after the third jab.

The figures are further prompting officials to consider speeding up the rollout of the fourth jab to ward off a future surge in cases among those who have already received boosters.

The Government report from the UKHSA revealed yesterday that Omicron is up to 70 per cent less likely to cause hospital admission than Delta – though SAGE warned it may need to be 90 per cent milder to avoid the NHS coming under unsustainable pressure.

It also found that the new strain is 31 to 45 per cent less likely to result in A&E attendance.

The UK Health Security Agency says its early findings are ‘encouraging’ but the variant could still lead to large numbers of people in hospital.

The analysis is based on all cases of Omicron and Delta in the UK since the start of November, including 132 people admitted to hospital with the variant. There have also been 14 deaths in people within 28 days of catching Omicron.

Separate data suggests 31 per cent of people included in NHS England’s daily hospitalisation figures were in treatment for more than a week before testing positive for the virus.

And other figures show 29 per cent of patients were being treated primarily for something other than Covid when they tested positive.

Professor Karol Sikora, a British cancer specialist and former adviser to the World Health Organization, said No10 should distinguish between actual Covid patients and those testing positive later when making decisions on further restrictions.

‘Those people should not be counted as Covid admissions. Having a hard and fast rule is obviously an easier way to do things, but it is not the right way.

‘The biggest danger of any more lockdowns is that it frightens people from using the NHS for other things and you will end up with more deaths than you would have from Omicron.’

‘If you look at the broader picture, we are busier at this time of year than we’ve ever been before,’ he said.

‘Our bed occupancy rate is 94.5 per cent compared to last year’s 89 per cent. That’s a huge difference in terms of much more busy.’

Mr Hopson said around 2,800 people are having to wait more than half an hour in the back of ambulances before being admitted to hospital every day, with staff shortages worsening the strain.

‘I was talking to the chief executive of London Ambulance Service yesterday who was telling me 12 per cent of his staff are currently on sick leave,’ he added.

‘What you can see is in places where Omicron in particular is spreading though the community you’re finding significant numbers of staff are off.’

It wasn’t all doom and gloom from Mr Hopson however as he added that the NHS is preparing to expand care capacity in case of a ‘surge’ but also said the health service should be able to manage.

‘What we’re trying to do is at the moment is just what we always do in the NHS, which is to prioritise care based on medical need,” he said.

‘We will and we are identifying places that would be needed if we really really needed to surge.’

Mr Hopson added that the NHS had handled around 40,000 simultaneous Covid hospital cases last January and would be capable of handling the current uptick in admissions, which stands at around 7,000 nationally.

‘We can do this, but the issue is, we’re in incredible pressure right the way across the health system,’ he said.