In the first half of Naomi‘s Season 1 finale on Tuesday, the titular character learned from the spirits of her deceased parents that they’d been betrayed.

In the second half, Naomi learned that the betrayers were none other than her adopted parents, Jennifer and Greg. The revelation, which the superhero teen discovered upon touching a piece of her space vessel, rocked Naomi to the core and caused her to defiantly fly away in a whirlwind of emotion.

Mouzam Makkar, who costars as Jennifer, knows Naomi fans will want to immediately part ways with the couple much the way their favorite metahuman did. But Makkar argues there is more to the story than meets the eye, and if there is a sophomore season, viewers will realize this.

“It really is painful because Jennifer is the mom that everyone wants,” Makkar tells TVLine. “She’s so supportive of Naomi, and she encouraged her to grow into the wonderful young woman she is. But the betrayal is heartbreaking, and it’s also very exciting to play a double-cross. [Executive producer] Ava DuVernay told me the trajectory of my character for the first season, and it floored me because we didn’t know the details until we got the finale script.” 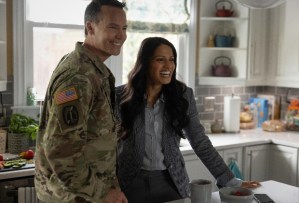 Still, Makkar reasons, the love Jennifer and Greg (7th Heaven‘s Barry Watson) feel for Naomi is real, even if they did something as dastardly as murdering her biological parents.

“You can’t fake love when you’ve been raising a child for 16 years,” the Law & Order: SVU vet explains. “It’s going to be exciting. Hopefully, when we get a Season 2, the rest of what happened will be fully explored. As an actor, it’s always fun to play up the darkness. Every human has a dark side and a light side, and I think our minds can travel to all sorts of places when we’re angry or sad. What can really push a human being to do something so drastic?”

Until there are more answers, Makkar bravely says she’s not afraid of fan hatred on social media.

“I’m ready to embrace it all,” she surmises. “As a fan reading the script, I was heartbroken, too. Naomi has been through so much, and her parents have been her guides. It’s a gut punch. Even after the scene was over, Barry and I stood there and said, ‘This is awful that this is happening to Naomi.’ So I get it… and I am ready to embrace the hate.”

What did you think of the shocking reveal in the Season 1 finale of Naomi? Did you see that coming? Grade the closer in our poll, and drop your thoughts in the comments.